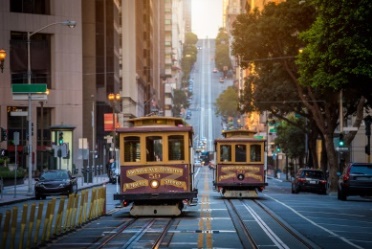 by Steve Brown
Share this Article:
While the fog was still trying to lift in San Francisco, the 2nd day of the Executive Management Road Tour kicked off. Finance and risk were the first topics on the agenda. Here we discussed the results of a PCBB survey of community bank CFOs and Risk Management Officers that brought to light the main concerns and areas of strategic focus. The top four concerns for CFOs were 1) new technology 2) required compliance 3) acquiring new customers and 4) remaining competitive. Showing proactive planning for the latter two concerns, many bankers in the room raised their hands when asked who would be introducing new products and services in the next 12 months. Risk Management Officers shared their biggest concerns as well, and unsurprisingly, cybersecurity overwhelmingly topped the list at 87%.
Next up was the regulatory panel, which included high level people from the FDIC, Fed and CFPB. Discussions gravitated around the current regulatory landscape and there was plenty of insight. Although regulatory changes are happening more slowly than the banking industry would like perhaps, the panel discussed some of the coming changes that could help community bankers feel less regulatory pressure. For example, some regulations currently in the pipeline have slowed down and the proposed expanded exam cycle for banks under $2B looks to be moving forward. The CFPB speaker also reassured the audience that only 5 actions from them were imposed on banks with less than $10B in assets in the past year. Meanwhile, the Fed speaker confirmed that CRE concentration levels were currently high and reminded community banks to be disciplined in this area. Finally, the FDIC speaker echoed this and also noted cash flow is critical on loans and that bankers should be closely monitoring it.
Cybersecurity was naturally another hot topic at the event. It was addressed by senior people from the FBI and Secret Service, along with an industry consultant in this area. While we cannot say much about this part of the event due to security reasons, suffice it to say they gave bankers tips and insight that was much appreciated and looks like it will be utilized.
Competition is becoming more pervasive for community banks as discussed in the competitive analysis session. Large banks (assets of >$50B) bring in more fees and are better at cutting overhead, with overhead net of fees at 0.82% vs. 1.87% for community banks (assets <$5B). This gives the larger banks more room for profitability even with slim margins. If increasing fees or cutting overhead is not easily achievable for community banks, asset-based strategies may help with profitability. Vertical lending and targeted lending were two of the strategies discussed to allow community banks more opportunities to enhance the loan portfolio and charge higher rates when risk increases.
BSA/AML was the final topic of the event. The results of a recent RSM survey highlighted the risk tolerance differences between large banks and community banks, as well as the various budget allocations and training provided for BSA/AML. The majority of the audience said that 2 FTEs were responsible for BSA/AML at their institutions, which rang true in the survey as well. More survey findings will be provided to all event attendees, including those at the upcoming Chicago event to be held September 25-26, 2017. Please join us for these thought-provoking sessions, filled with important takeaways to help drive profitability and control risks at your bank.
Subscribe to the BID Daily Newsletter to have it delivered by email daily.

A Korn Ferry survey of Chief Marketing Officers finds 61% of directors and CEOs view marketing as a revenue generator vs. a cost center (19% were neutral and 20% disagreed or strongly disagreed).

MIT research finds the specific technology respondents ranked as most important to their organization in 2017 were: analytics (34%), social media (19%), mobile (14%), internet of things (11%), cognitive technology or artificial intelligence (5%) and robotic process automation (2%).

A Deloitte survey of executives finds 38% of respondents expect efficiencies such as lower costs or increased speed as one of the primary benefits of using blockchain technology.

A Manta survey of small business owners finds 34% say they do not have a retirement plan. Main reasons given were having insufficient income from their business to support it (37%), using previous savings to invest in their business (21%) and planning to sell their business to fund their retirement (18%). To gain new relationships, perhaps your bank may want to consider launching a program to educate this customer group better and focus on opening new accounts even with small dollars to start.

In an effort to expand our relationships, PCBB is pleased to offer community banks a money market deposit account rate of 1.10%, subject to availability. Contact operations@pcbb.com