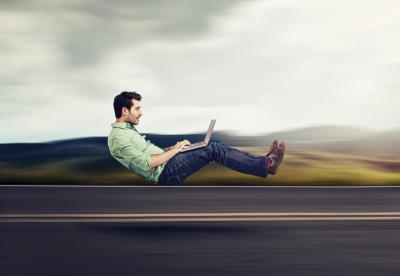 by Steve Brown
Share this Article:
The world has definitely changed over the past few years as things have really accelerated. Look no further than research by Forbes Insights that finds 82% of customers will conduct product research online. Once that work is completed, 75% of these same people according to research by McKinsey expect "now" service within 5 minutes of making contact online. This is the world we live in; speed in all things is now a way of life it would appear.
In banking, small business owners also want speed and great service when they are looking for a loan. This group also has higher loan approval rates and are the most satisfied with their overall experiences when they borrow from small banks, credit unions, and community development financial institutions. That's just part of the news from the 2016 Small Business Credit Survey, an annual survey of firms with 500 or fewer employees.
The latest survey heard from over 10k respondents and offers a snapshot of these firms' financial health, financing needs, and borrowing experiences. We wanted to provide you with some of the highlights to help you as you accelerate down the road with your small business customers.
The 2016 picture shows steady performance, but also signs of slowing revenue growth and strains on operating funds. Just as in 2015, a majority of small businesses reported they were profitable and had growing revenues. But, the net share reporting revenue growth declined from 2015 in 2016. Overall, 61% of firms faced financial challenges in 2016, with 76% of business owners using their own money to fill financial gaps.
Despite these challenges, most companies in the survey were optimistic about 2017, with expectations it would be similar to 2016. Some 61% thought revenues would grow and 39% anticipated job growth this year.
Although 34% of the surveyed businesses increased their debt in 2016, only 19% thought they'd borrow more in 2017. Almost 50% of those who predicted the same or lower debt levels say that they have enough money right now.
Of interesting note, however, a Bank of America Small Business Owner Report finds established business owners turn to loans as sources for capital more often than their rookie counterparts - 43% vs. 25%. Knowing this hopefully gives you information to better serve specific needs of business customers.
The bad news is that loan applicants reported an average greater incidence of credit risk factors than non-applicants. Put another way, fewer applicants were profitable, more had financial problems in the previous year, and more reported low credit scores. Knowing this, you may want to cast your net a bit wider to capture a larger number of high credit loan applicants.
The study also found demand for financing was steady from 2015 to 2016, with about 45% of firms applying for loans. Half of prospective borrowers looked for financing at large banks, while 46% applied to small banks. Further, 21% of businesses with annual revenues greater than $1mm also applied to online lenders. Big banks and online lenders remain a threat to community bankers so it is critical to keep your customers coming back to you for all their financing needs.
The good news is that businesses with $1mm or less in annual revenue still find their best access to capital at smaller banks. Smaller banks and credit unions approved 60% of loans to this group vs. just 45% at larger banks. Not surprising to community bankers, successful applicants were happiest with their overall experiences with small banks (75%) vs. their experiences at large banks (46%) or online lenders (27%). I guess it still proves that no matter the speed of change, business owners still see a great advantage in choosing community banks over competitors.
Subscribe to the BID Daily Newsletter to have it delivered by email daily.

Of Growth And Efficiency

Branch Closures - Do You Need Them?

Cleveland Fed President Mester said the economy is at full employment and inflation is nearing the 2% goal so the FOMC should raise rates more than once this year and begin to reduce its balance sheet size.

Treasury Secretary Mnuchin has made two specific recommendations to reduce the regulatory burden on banks. These include exempting all banks with <$10B in assets from Dodd Frank rules and raising the $50B threshold for stronger oversight to an unnamed threshold.

Research by BitSight (related to the WannaCry ransomware attack that hobbled systems globally) found that companies that uploaded critical patches from Microsoft on March 14, when those patches were released, were immune from the attack. As such, look for a heightened regulatory focus at your next exam on keeping patches up to date across all systems.

ACAMS research finds regulators will take a close look at each bank to do a risk assessment for BSA. This process includes such things as: reviewing prior exams (look for areas already flagged); board minutes (look to see whether the bank is contemplating or has entered into new lines of business or has material lawsuits, losses, fraud or other things that should result in SARs); new businesses (has the bank conducted a risk assessment prior to doing so); higher noninterest income than peers (look for drivers and whether TPP, MSB or other high risk customer relationships); rapid growth in assets or employees (has BSA program kept up); website review (does it promote higher risk services); and how management responds to interviews and requests (to identify potential risk areas).