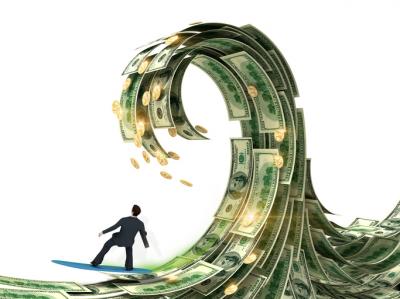 Most people know ocean tides are caused by the gravitational pull of the moon and the sun. That said, surfers will tell you that the sun's gravitational force is only 46% that of the moon, so the moon is really the single biggest factor here. They will also tell you the highest tides in the world are found in the Bay of Fundy in Canada, where the difference between high and low tide can be taller than a 3 story building. Scientists will tell you that tides are essentially really long waves that move through the oceans.
As you bob up and down this morning thinking about this, as you have no doubt seen over the span of 2017 so far, bank stock prices have also bobbed up and down.
Bank stocks have risen at some points, as positive thoughts about financial opportunity, tax cuts and higher rates have flowed into the banking shore. Bank stocks have also fallen, as negative thoughts about healthcare, lower oil prices and regulatory uncertainty have ebbed away from the banking shore. No one is too sure where it all ends up at this point, but as optimistic people we think the higher rates and less regulation will eventually win out and community bankers will benefit.
Rising bank stocks can be both good news and bad news. It can screw up M&A deals in motion, as the buyer has a stronger currency, while the seller does too so they want a higher price.
While higher bank stocks are generally good news, much like the sudden overall improvement of equity markets, there is no guarantee that such moves are sustainable. To put it all in perspective, take a closer look at what has driven bank stocks up and what may happen to push then the other way.
One of the biggest factors behind rosier valuations for banks is sheer optimism. This was led by Trump's victory because he consistently called for varying degrees of deregulation during his candidacy and banking is one of the heaviest regulated industries.
Huge corporate tax cuts are both good and bad so this one is a bit trickier. Depending on how things go, tax cuts would reduce the return on municipal securities and could impact deferred tax assets as well. On the latter one, check with your accountants on specifics as we don't have enough room here to explore it today.
Another area driving positivity is pointed out by the CEO of investment banking firm Keefe Buyette & Woods. He notes that bank capital is at its highest level in 7 decades. Therefore, if some of the administration's promises take shape with fewer regulations and/or loosened enforcement (along with cut taxes), bankers could reap huge returns from this capital. Additionally, profitability could be regained as margins jump and there might even be fewer expenses associated with compliance. These would all likely encourage higher loan growth and more dividends.
This outlook for community banks looks far more promising than a year ago, but the tides can change, so bankers have to be watching the horizon closely.
No matter what happens, rates moving higher and talk of an impending tax cut would very likely both be positives for community banks no matter how those come to pass. Until then, it is important to remember that there is still considerable work to be done before community banks will feel the full effect of any policies so hang in there. The good news though is that the sun is out, the skies look clear and the waves seem to be better for bankers than they were just last year.
Subscribe to the BID Daily Newsletter to have it delivered by email daily.

Yields bumped up 1bp due to mixed economic data and strength in home builder confidence.

Fed research on small businesses finds 19% expect to increase their debt level this year vs. 34% who did so in 2016.

A survey by Trustwave finds the top offenses for IT personnel that lead to firings relate to failures in meeting regulatory compliance resulting in fines or penalties; tech investments that lead to a security breach; breaches that become public; a failure to keep security programs up to date; and authorizing tech investments that prove unable to scale to meet rising demand as the business grows.

Cisco cybersecurity research finds that when breaches occur, the functions most likely to be affected were operations (36%), finance (30%), customer retention (26%) and brand reputation (26%).

Accenture Strategy research projects blockchain technology usage could save banks $8B per year.

Xerox research finds 77% of small and medium sized businesses have begun to or intend to digitize paper processes. By category, 37% have just started the process, 28% are well advanced and 12% say they plan to start digitizing over the next 1 to 3Ys.

Fed research on small businesses finds reasons owners said they did not take on debt in 2016 included: already had sufficient funding (47%), were trying to avoid debt (27%), or believed they would be turned down (17%).

Research by Instantprint of small businesses finds that about 56% of female business owners say they are dedicated to the business vs. approximately 40% of their male counterparts.
Copyright 2018 PCBB. Information contained herein is based on sources we believe to be reliable, but its accuracy is not guaranteed. Customers should rely on their own outside counsel or accounting firm to address specific circumstances. This document cannot be reproduced or redistributed outside of your institution without the written consent of PCBB.