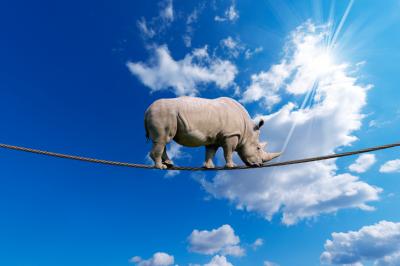 by Steve Brown
Share this Article:
The "nose horn" is a very large and strong animal, but despite its weight of up to 5,000 pounds and a horn or horns to protect it, poachers have reduced the wild population over the years to an estimated 29,000 worldwide. This got us wondering about something we hear often in the banking industry from pundits that bigger means stronger so banks need to be large to survive.
Bankers will be interested to note, however, that two research papers presented at this fall's Community Banking in the 21st Century Research and Policy Conference find that is not the case, but rather size can either help or harm, so it depends.
In the paper from the Philadelphia Fed, "Is Bigger Necessarily Better in Community Banking," researchers found the answer is pretty much yes. The increasing cost of regulation, coupled with the need to invest in technology, creates fixed costs that hurt community banks overall. Banks can mitigate these costs primarily by getting bigger, which has prompted increasing M&A activity among community banks.
Interestingly, financial performance seems tied not only to the size of the community bank, but also to the mix of small-business loans. Here, researchers found that financial performance is better at large community banks, where small-business loans make up a bigger proportion of assets. At smaller community banks, a higher mix of small-business lending was tied to lower performance. It suggests, they say, that large community banks could improve performance by increasing their small-business loans. It also suggests that small community banks might do better by reducing the quantity of small-business loans perhaps.
While these researchers may have come to a conventional conclusion about the benefits of size, other researchers from the conference suggest it may be too early to jump to conclusions. In "Has the Relationship between Bank Size and Profitability Changed?" from the Kansas City Fed, researchers suggest smaller banks can beat bigger ones, thanks to factors both within and outside of their control.
These researchers do find that profitability, measured by ROA, increases with size, but at a declining rate as banks get bigger. More importantly, though, they find evidence that small banks can boost profits via strong customer relationships, conceivably offsetting the benefits of being big. In their research, the authors isolated bank size and then studied the effects of bank-specific factors like business strategies and organizational structure, along with market-specific factors, such as competition and local economic influences.
In one example, they found that increasing core deposits vs. brokered can boost ROAA. Doing the math, researchers found a 10% boost from the average could allow a $1B bank to achieve the same ROAA as a $2.5B bank.
Then, there are those things bankers simply can't choose, but can work to their advantage. Here, researchers find that if the local unemployment rate falls 10% from the average, a $736mm bank could achieve the same ROAA as a $2.5 billion bank. This may not be feasible in some geographic areas, but it shows local economic factors can definitely impact banks in a positive way.
As a community banker, here are some key takeaways from this research: when it comes to higher profitability, small changes in bank-specific or market-specific factors can make a big impact; the size of the impact can be equivalent to large changes in size; you do not necessarily need to grow larger to be successful; business strategies and local economic growth are no less important in determining bank profitability; and bigger is not necessarily better. Community bankers should leverage this research to charge forward through the significant changes going on in the banking industry.
Subscribe to the BID Daily Newsletter to have it delivered by email daily.

Skimping On Cybersecurity - A Risky Business

Call Report Reform On The Horizon

Research by Deloitte finds 90% of financial services executive respondents agreed or strongly agreed that digital technologies are disrupting the industry to a great or moderate extent. Despite this, only 46% said their company is adequately preparing for that disruption.

Research by the Society for HR Management finds social media sites used for recruitment most often are: LinkedIn (96%), Facebook (66%), Twitter (53%), professional or association social networking site (35%), Google+ (12%) and YouTube (11%). Of all of these, LinkedIn ranked highest at 73% as the most effective site (followed well behind by Facebook at only 14%).

The saga continues at Wells Fargo, as Prudential said it would suspend offering a low cost life insurance policy through Wells until it reviews how the product was sold. Meanwhile, Wells said it has discontinued offering referrals of renters insurance to Assurant until it can review how it offers online insurance product referrals. Finally, banking regulators have sanctioned Wells for providing an inadequate living will plan to avoid a taxpayer bailout if it went into bankruptcy. Under the sanctions, Wells is not allowed to create new international banking units or acquire nonbank subsidiaries. Further, if Wells fails the test again, it could see its growth limited and be forced to divest itself of certain assets.

Research by Fiserv that looked at the habits of banking customers finds the most common reasons people said they visited their bank branch were to deposit checks (68%), withdraw cash (51%) and to speak to a representative (22%).