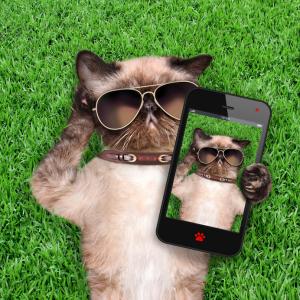 It is more than likely that you've heard and even used the expression "there is more than one way to skin a cat" at some point in your life. But have you ever wondered where the expression came from? We did, so we looked into its etymology. It turns out the answer is a bit disturbing. It seems that back in 1832 there was discussion about whether cats were skinned alive or after they were already dead in Britain's House of Commons, as cat skins were apparently used as women's furs. That is just gross, so we prefer to think the expression merely stems from Mark Twain's use of it in A Connecticut Yankee in King Arthur's Court, as nothing more than a way of saying there is more than one way things can be done.
Just like there is more than one way things can be done, it turns out that there is perhaps more than one way so-called blockchain technology may eventually help reduce costs and add efficiencies for banks.
We have written about this before, but as a quick reminder, blockchain is basically a technological ledger. While this may not sound like very much, it has huge potential implications for bankers down the road.
To begin, blockchain technology in banking would track transactions, certify ownership and clear transactions. Since that is much of what banking is all about (contracts and transactions for instance), streamlining this may eventually deliver huge bottom line savings to financial institutions.
Well beyond the potential for payments, consider the potential impact if this nascent technology works in such areas as settlement, clearing, regulatory reporting, collateral management and trading. All of this movement would be instantaneous, cheap and easily tracked back to its original destination all the way through the "chain."
Additionally, consider that this technology as billed may eventually allow data to be shared amongst counterparties related to identifying the clients and ownership of a business under know your customer (KYC).
Finally, consider the benefits and cost savings if you could automatically comply with anti-money laundering (AML) regulations. All of these are possibilities with blockchain and they are key reasons why so many of the largest banks are looking closely at this technology and tinkering with it.
As we've mentioned before in this publication, the banking industry's efforts to create practical solutions for blockchain technology are well underway and are being aggressively developed. Who knows where it all ends up, but suffice it to say that effort is being expended so something in it seems to have decent promise perhaps.
Thus far, the banking industry's focus has been on using the blockchain technology for itself. We wonder how long it will be before banks start looking at how they can provide some of the same technologies to business customers.
We will check back in on this technology as it evolves to keep our community bank readers up to speed as things develop. In the meantime, ponder what it might mean one day if you could use this technology to vote, document real estate purchases, hold medical history, execute contracts, notarize documents and streamline many, many manual processes in banking. Maybe there really will be more than one way to do things in the future.
Subscribe to the BID Daily Newsletter to have it delivered by email daily.

Yields were little changed, up 1bp, as investors await the stimulus decision from the Bank of Japan policy meeting.

If your bank is worried about how well your customers are keeping up with technology, consider the results of an Endurance International Group survey of small business owners. It found that only 5% say they have difficulty understanding the rapidly evolving technology around them and consider it a major challenge.

Community bankers seeking to originate more loans may want to focus additional energies on small businesses with millennial ownership. This is because a Wells Fargo survey of small business owners finds only 59% of millennials are happy to stay a small business (vs. 79% of older owners) and 41% want to grow the business as large as possible.

FICO reports about 9mm Americans have their identities stolen each year.

A survey by CreditCards.com finds 60% of people pay cash for purchases below $5, 27% use debit cards and 11% use credit cards. Over the past 2Ys, cash usage has declined 7 percentage points, while debit usage has increased 5 points.

An Animoto survey of small business owners finds almost 77% say they have seen direct results from video marketing on their business.

Research by US Trust finds 77% of people with at least $3mm in investable assets came from middle class or lower backgrounds and 19% actually grew up poor.
Copyright 2018 PCBB. Information contained herein is based on sources we believe to be reliable, but its accuracy is not guaranteed. Customers should rely on their own outside counsel or accounting firm to address specific circumstances. This document cannot be reproduced or redistributed outside of your institution without the written consent of PCBB.