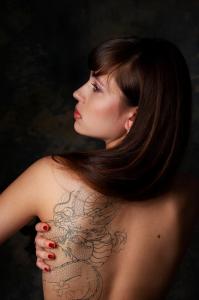 When Swedish author Stieg Larsson unexpectedly died of a heart attack in 2004 he never got to see the success of his Millennium trilogy, which began with the novel The Girl with the Dragon Tattoo. Larsson's novels have sold millions of copies and have made his estate worth a fortune. Unfortunately for Eva Gabrielsson, Larsson's live-in girlfriend of 32Ys with whom he also shared a laptop, the author failed to leave behind a will. Since Sweden doesn't recognize common law marriage, the proceeds of his book sales have gone to his estranged father and brother. A fourth novel that was partially completed on that shared laptop before Larsson's death has yet to see the light of day and has resulted in Larsson's father and brother filing suit against Gabrielsson, who refuses to turn it over. Since it is unclear who legally owns the novel on Gabrielsson's computer, fans of the Millennium series will have to wait for the Swedish courts to determine its fate.
The lack of clarity surrounding this ownership issue is in stark contrast to the world of heavily regulated banking, where nearly everything is black and white, and where discrepancies must be handled in a specific way. Consider the story of Citizens Bank (RI), which had to pay $35mm in fines and refunds for unfair and deceptive practices around how it handled deposit discrepancies. Regulators found bank practices related to reconciling deposits failed to resolve discrepancies between the amount of funds deposited by customers and the amount encoded from the accompanying deposit slip. The bank further failed to notify customers when discrepancies were found, failed to correct deposit amounts, and did not describe accurately its process for resolving such discrepancies.
Roll forward 1Y and the FFIEC has now outlined exactly how banks should handle such instances. While regulators acknowledge that there are multiple reasons deposit discrepancies occur - from the wrong amount written on a deposit slip, to encoding errors entered by tellers, or computers capturing poor quality images of deposit slips - they also make it clear that failing to correct such mistakes is not an option for banks.
The CFPB even stated that "consumers should not be denied timely access to the full amount of their deposits," and that the new guidance "should make it clear that we expect financial institutions to take steps to handle and resolve deposit discrepancies and avoid consumer harm."
The interagency guidance, which summarizes the regulations and laws regarding deposit discrepancy practices, notes that there are a range of laws and regulations that can be applied to deposit reconciliation practices.
Under the Expedited Funds Availability Act, banks that fail to make the correct amount of funds deposited into a transaction account available within the required timeframe, including resolution of any discrepancies, face the prospect of violating Regulation CC (could see civil liability and regulatory action). Similarly, the guidance notes that both the FTC and portions of the Dodd-Frank Act prohibit unfair, deceptive or abusive acts or practices, which also apply.
The collective regulatory agencies emphasized that banks are expected to maintain deposit reconciliation policies and practices that not only prevent or quickly reconcile any discrepancies, but that such policies do not disadvantage or harm customers. Additionally, banks are expected to implement compliance management systems that include appropriate policies, procedures, internal controls, training and oversight and review processes to ensure that they adhere to applicable regulations and laws, such as those mentioned previously.
Let's just say that deposit reconciliation is as big a deal to the regulatory agencies, as perhaps the shock some parents might feel when the see a large tattoo of a dragon on their daughter.
Subscribe to the BID Daily Newsletter to have it delivered by email daily.

Manufacturing data came in at its highest level in a year pushing yields up 1bp.

Despite all the noise in the economic system right now, research by JPMorgan finds the global economy is less volatile than at any period since 1970. Researchers examined standard deviations of quarterly annualized GDP for the study. They also found large economies like the US are only marginally more volatile over the same period.

TD Ameritrade said it will offer online investment management services (robo-adviser) to its clients later this year. Meanwhile, Wells Fargo said it plans to test just such a service early next year. Both banks and others are actively exploring this opportunity to see if they can use it to capture and retain more customers.

The latest Bloomberg survey finds major economists now project the UK economy will dip into recession for the first time since 2009, following its historic Brexit vote. They project a 0.1% decline in GDP in Q3 and Q4 of this year and have reduced 2017 growth from 2.1% prior to 0.6% now.

A Babson College survey of small business owners finds respondents are about 400% more likely to apply to financial institutions for capital than any other source.
Copyright 2018 PCBB. Information contained herein is based on sources we believe to be reliable, but its accuracy is not guaranteed. Customers should rely on their own outside counsel or accounting firm to address specific circumstances. This document cannot be reproduced or redistributed outside of your institution without the written consent of PCBB.