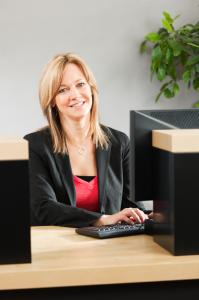 by Steve Brown
Share this Article:
Bank branches are dead. Kaput. Done for. Outta here. Millennials rule the future and theirs is a digital world. Bricks are so last century. Banks that fail to fully embrace electronic banking and instead cling to old-fashioned physical contact via branches are simply not going to survive and thrive in our brave new world of banking. Once the baby boomers are gone, there will be no one left who even knows what a bank branch is for.
Or so we've been told. But before you start shuttering branches and hitching your future to electrons, you might want to consider the view of one Tim Sloan, president and chief operating officer of Wells Fargo. As head of operations, Sloan sees firsthand how the 70mm Wells Fargo customers interact with the bank. What he sees is an awful lot of customers, young and old alike, who continue to vote with their feet. They walk into branches or up to ATM machines.
At a recent Bernstein strategic decisions conference covered by The Motley Fool, Sloan spoke about how Wells Fargo approaches a range of issues. For community bankers, some of his most interesting and actionable comments revolved around branches.
In The Motley Fool's report on the conference, Sloan said there is a widespread "misunderstanding" that nobody goes into branches anymore. "That's just wrong," Sloan said. People across demographic groups continue to use branches. Significantly, he pointed to statistics broken down by age group. "What you see is that millennials go into our stores just as often as baby boomers," he said. While neither group visits branches quite as often as earlier generations, he said, it is significant that the anticipated drop-off in branch usage by the younger generation doesn't seem to be taking place at Wells Fargo.
Why should a community banker care what Wells Fargo thinks about branch banking? Wells Fargo has a pretty good vantage from which to assess what banking customers want and need today. Wells has about 6,200 US branches, more than any other bank. It holds 10% of all US bank deposits, and through its more than 90 business lines, it does business with 1 of every 3 households. If Wells sees millennials in its branches as often as it sees baby boomers, that's a pretty good indication that the rest of the country is probably seeing something similar. Community bankers may already be aware of this trend anecdotally, but now Wells Fargo offers some statistical validation.
Based on the observation that branches remain viable for now, Wells plans to continue investing in its operations. Wells is also investing in online and mobile banking at the same time. The gist is that online and mobile channels are not replacing branches, but simply adding new ways to engage with customers. "We've got to make that experience with the customer seem seamless, regardless of how they want to interact with us," Sloan said.
The last message is particularly important for community bankers who, in their rush to adopt and enhance online and mobile banking, may be tempted to let branches slip. That would be a mistake it seems, particularly since even millennials continue to patronize branches. Banking is a service business, and one of the main services that customers still demand of their bank is a convenient and desirable branch experience. As Sloan points out, that demand shows no signs of abating, even with the rise of electronic banking.
Subscribe to the BID Daily Newsletter to have it delivered by email daily.

1) 15 bank holding company Wintrust Financial ($23.7B, IL) will acquire First Community Bank ($178mm, IL) for about $30.3mm in cash. 2) Commencement Bank ($177mm, WA) will merge with Thurston First Bank ($131mm, WA) in a merger of equals. Commencement shareholders will own about 65% of the company and Thurston First shareholders will own about 35%.

As capital and funding become scarcer, online lenders have fired staff. Some notable names are: Avant (40%), Prosper (28%) and LendingClub (12%).

The IMF projects the impact of the UK leaving the European Union will reduce GDP in the region from 1.6% this year to 1.4% in 2017.

Shares in Italian banks have tanked as much as 75% in the past year (and 45% in the past 10 days), as high levels of non-performing loans and stress from the Brexit spillover have taken their toll. Italy is working on a bailout package for its banks, but is in conflict with more stringent EU rules (forces private investors to take losses first before public money can be used) so it is dragging out. Meanwhile, JPMorgan research indicates a full recap of the system should be "manageable."

After fake debit cards were used at more than 1,000 ATMs in Japan recently, banks in that country have ramped up efforts to fight such fraud. The biggest step announced so far includes sharply reducing withdrawal limits (by 50% or more) for customers using non-Japanese cards.

US Travel Association research finds that when it comes to taking vacation, 58% of employees say they do not get support from their boss and 53% said they sensed a similar lack of support from colleagues.