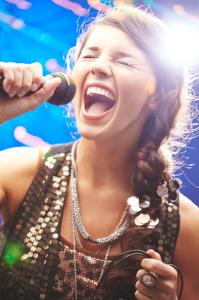 by Steve Brown
Share this Article:
We suspect there may be a few readers of the BID who will be suffering from withdrawal in the fall TV season. This group may not want to admit it but they will miss American Idol, the fabulously successful talent competition that wrapped up its 15Y run in April with a tribute to its past contestants. The show produced now well-known stars that include: Carrie Underwood, Kelly Clarkson, Clay Aiken and Oscar winner Jennifer Hudson. It also produced William Hung, whose rendition of "She Bangs" became legendary.
Over the course of a decade and a half of American Idol, the concept of American celebrity, and how someone becomes famous, change markedly. In 2002, allowing viewers to vote via text message was revolutionary. By 2010, however, some of the show's "unknown" contestants were coming in with significant YouTube followings, and the show stopped the singers from managing their own Twitter accounts, because their number of Twitter followers might spoil the surprise of who won. Where would the drama be then?
We thought of this when we read Bank Director's 2016 Compensation Survey. There are two big takeaways, we think, from the results: Bank leaders reported a shortage of quality commercial lenders on the market; and a number of banks seem to be having problems recruiting the next generation. Both of these are likely issues for many banks as there are significant shifts going on.
Bank Director reports this is a result of fewer training programs at the nation's biggest banks, coupled with an aging Baby Boomer population. These issues result in what Emily McCormick from Bank Director calls, "a mini-crisis for the banking industry."
The Bank Director survey shows 43% of respondents believe there aren't enough talented commercial lenders in their markets, even though the same 43% say they're willing to pay highly for that talent.
At the same time, the survey suggests there are troubles in creating the next generation of lenders in-house. About 34% of respondents say their banks are actively seeking Millennials, "but have trouble attracting talented employees." The remaining respondents are split evenly between saying they're "satisfied" with their efforts to attract Millennials, and those who say hiring Millennials "is not a focus," which makes us wonder what those banks are doing to replenish their pipelines of talent.
The banks who say they're having trouble attracting Millennials say, flatly, "Millennials aren't interested in working for a bank" (60%) and "Our bank's culture is too traditional" (54%). Those answers are also frequently mentioned across all asset sizes of banks, as those with more than $1B in assets seem to have the same problem recruiting as those below $1B.
But then, there are the banks that are happy with their Millennial recruitment and their answers suggest a different approach to doing things. They have created, they say "a culture that Millennials feel comfortable in" (71%) and "a clear path for advancement within the bank" (59%). Interestingly, it's the smaller banks in the survey that seem to do best with the latter advantage. Just 33% of banks with more than $5B in assets say they offer a clear path, but at least 50% and as many as 73% of the respondents in the smaller size categories say Millennial employees have a clear view of how their career will progress.
This, of course, dovetails with what we've previously learned and shared in the BID about younger workers. They're not satisfied to just put their heads down and assume they'll move up in the bank at some time in the future. They want to know right from the beginning that they have a future in the bank and that there are distinct, measurable steps they can take to advance. Not all may turn into commercial-lending Idols, but it's a talent competition banks are ill-advised to ignore.
Subscribe to the BID Daily Newsletter to have it delivered by email daily.

Is your Bank's Head in the Clouds?

In her most recent congressional testimony, FOMC Chair Janet Yellen said "the FOMC continues to anticipate that economic conditions will improve further and that the economy will evolve in a manner that will warrant only gradual increases in the federal funds rate." It looks like we will continue forward on a steady economic path for now at least.

The latest Gallup survey of Americans' confidence in banks is only at 27%, remaining below 30% for the 8th straight year. For perspective, this level is about half of what it was in 2004 when it registered 54% and even further below the 60% record level registered in 1979.

MarketWatch reports the CIO of JPMorgan indicates the bank has a $9.4B technology budget, of which about $3.0B (32%) goes into new investments. Overall, the technology team has 44,000 employees.

A survey by Viacom finds 33% of Millennials say they will not need a bank in the future, despite the fact that other surveys find 90% currently have one. Of note, only 4% have an account with an online only bank.