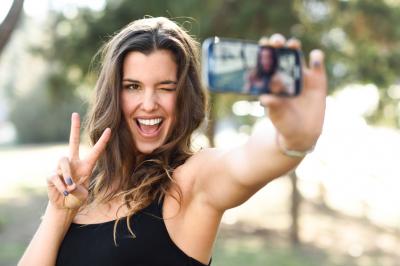 You may not have been counting, but if you are a Millennial (18 to 34Ys old), a survey from tooth whitening brand Luster Premium White finds you will take up to 25,700 selfies in your lifetime. Further, research by Pew also finds about 50% of Millennials have posted a selfie to a social media website, compared to 24% of Gen Xers and 9% of Baby Boomers. All in all, Google finds people take 93mm selfies per day using Android alone, so when you add in everything else it has to be massive.
Now banks are getting into the act. In fact, back in late February, MasterCard said it was rolling out new mobile technology that will allow customers to authenticate online purchases using a selfie. That led to another announcement in late March by Bank of Montreal, who said it would launch this biometric identification program to its corporate customers starting this summer. Given summer officially begins on June 20, which is a mere 12 days away, things are moving along very quickly.
Beyond Bank of Montreal, MasterCard indicates other large banks in the US, Canada and the UK are also expected to roll this out in the next few months.
That's right - a selfie will soon be all it takes to complete online payments for business and consumer customers.
It remains to be seen how fast adoption occurs, but given the percentages at the lead-in, it could be pretty fast indeed. The MasterCard product alone is designed to help people improve the security of their shopping transactions through photos of themselves. MasterCard should also get a deeper connection with its customers as it begins to, in its own words, "identify people for who they are, not what they remember."
For the moment, this biometric security feature is being tested by employees at various banks. Oh, and for the shy ones out there, the MasterCard app also allows for fingerprint scanning instead of mugshots, if you prefer.
For its part, Bank of Montreal (which by the way has total assets of about $681B and some 46,000 employees) says the technological advance makes sense for them. It begins to replace the password, enhances security and will probably attract a younger, more tech-savvy generation.
This good news story aside, we would be remiss if we didn't take a moment to say not everyone is smiling. In fact, some online security experts are outright frowning about this idea. Among the issues they say biometric passwords that get compromised really would compromise you as a person because unlike a password it would be much harder to fix perhaps. Further, such experts as Scientific American points out that cameras installed by police departments all over major cities could use facial recognition technology to track you wherever you go.
We would say the truth probably lies somewhere in between as with most things, so fingerprints and selfies are likely more secure than many dumb passcodes people use all the time. Also, it probably takes a nation state sponsored hacker to bust into facial recognition biometrics, essentially knocking lower level dirt bags out of the hacking game (at least for now).
Just like someone can quickly glimpse over and acquire your pin number, we guess they could steal your picture too, but experts say that is multiple times harder. Bad pun intended, let's face it that bad actors might one day be able to steal your facial components and hijack your selfie. That's why, no matter what security features you implement, its important banks build a safe, and secure transaction product beneath the user interface and continue to know your customers like you do today (face to face) as a community bank.
We know it is cheesy, but security is critical to keep clients smiling, regardless of the passcode method. Indeed, they won't be saying cheese, either. Instead, they might be saying something else, like words unfit to print.
Subscribe to the BID Daily Newsletter to have it delivered by email daily.

Yields dropped 2bp as investors continue to digest Fed commentary and the timing of any potential rate hike.

Royal Bank of Scotland is replacing human investment advisors with so called "robo advisors" that use computer software. The shift is focused on customers with at least $250,000 to invest.

An Experian survey finds about 45% of first time homebuyers say they have delayed buying a home in order to improve their credit score.

A survey of global CFOs by CNBC finds the biggest external risk factors their businesses are facing are consumer demand (42%), cyberattack (21%), US Dollar strength (8%), low oil prices (8%) and terrorism (8%).

A survey of small businesses by Wasp Barcode Technologies finds the following usage of social media platforms: Facebook (70%); Twitter (38%); LinkedIn (37%); YouTube, Vine or Vimeo (26%); Instagram (25%); company blog (24%); Yelp (16%); Pinterest (14%); and live streaming apps (7%).
Copyright 2018 PCBB. Information contained herein is based on sources we believe to be reliable, but its accuracy is not guaranteed. Customers should rely on their own outside counsel or accounting firm to address specific circumstances. This document cannot be reproduced or redistributed outside of your institution without the written consent of PCBB.