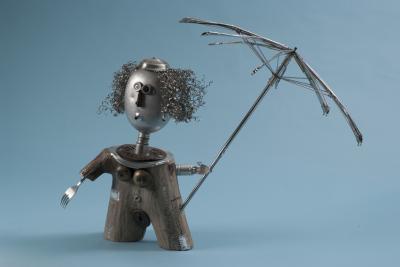 Banking On Cell Phones And GPS

The recent opening of the Mapping Brooklyn exhibition in Brooklyn, NY, breathes new life into the old saying "One man's garbage is another man's treasure." The exhibition features a 10X10 map of Brooklyn that artist-cartographer, Jennifer Maravillas, made entirely from discarded paper litter she collected while strolling down every block of the borough. Maravillas spent 3Ys working on her piece, aptly named 71 Square Miles to reflect the land area of Brooklyn. Now that it's finished and on display, Maravillas has begun work on her next artistic endeavor, dubbed 232 Square Miles, which will be a giant map made from garbage collected in all five boroughs of New York City. She estimates that the project will take at least 10Ys and requires at least 3X as many walks as her Brooklyn map adventure.
Nowadays, thanks to the widespread use of GPS, many people don't even know how to read a map, let alone create one from garbage. We use GPS for everything from finding our way to the airport, to navigating our walking path down the streets of a foreign country. With so much banking on GPS, it's no wonder that banks themselves are starting to consider adopting the technology to track their customers' location as a means to curb credit card fraud.
The thinking goes like this: Most people are tethered to their phones. So, if they're making a credit card purchase and their phone is in the same location as the card, there's a good chance the purchase is legit. It's a simple enough concept, but the application is somewhat more problematic. We foresee privacy experts having a field day with this one, not to mention that many banks haven't collected the basic requirement for tracking which is of course, the customers' cell phone number.
Despite these hurdles, a small number of banks are reportedly rolling out or considering using the technology to track customers. US Bancorp plans to offer the service in the coming months to customers who opt in. Discover Financial Services Inc. and USAA also hope to roll out similar services to cardholders at some point, and other large banks have explored the idea, according to a Wall Street Journal article.
Visa and MasterCard already offer location-based antifraud services. MasterCard launched a pilot program in 2014 as a way to help US consumers traveling abroad avoid unnecessary purchase declines. Visa announced its own geo-location service a year later for the same stated purpose. Visa said at the time that it expected mobile location confirmation would reduce unnecessary purchase declines for travelers by as much as 30%.
Thus far, banks haven't been all that receptive to location tracking in the US. That thinking may be starting to change, however, now that card fraud has become a multibillion-dollar problem. For the benefit of fraud prevention, many customers might be open to a bank tracking their cell phone. A Jan report by Pew indicates there are a number of circumstances when US consumers would readily share personal information or permit surveillance in exchange for something of perceived value. Importantly, the study also noted that their willingness largely depends on how the information is collected, used and retained and whether it is made available to third parties.
Now that some banks are starting to adopt location-tracking capability, others are certain to navigate down the same road in the not-too-distant future. The map has yet to be defined, so tread carefully however. Using GPS to guide fraud-fighting efforts is a far cry from littering customers with information they don't want and didn't ask for, but it can also add value.
Subscribe to the BID Daily Newsletter to have it delivered by email daily.

Yields were little moved amid factory order data which came in as projected, and durable goods data which fell below Feb forecasts.

Analysts at multiple investment banking firms indicate about 30% to 40% of deposits in branches the largest banks have sold recently do not transfer to the community banks that purchased the branches. Customers of the large banks seem to be stickier than expected and willing to go more digital rather than change banks. Community banks using this as a strategy to capture new customers or funding should be aware of this shift and model accordingly.

A federal judge has rescinded the systemically important label from FSOC on MetLife. As such, MetLife will no longer be subject to strict federal regulations related to its activities. Given the reversal, look for other institutions flagged as such to also seek to overturn their label and for the government to appeal.

Law enforcement officials indicate hackers have broken into some of the biggest law firms in the US and may have taken confidential information. Multiple law firms were reportedly breached.

Citibank research projects technology automation could result in a 30% decline in banking jobs in the US and Europe in the next 10Ys. Branch closures, more digital usage and other technology advances are primary drivers.
Copyright 2018 PCBB. Information contained herein is based on sources we believe to be reliable, but its accuracy is not guaranteed. Customers should rely on their own outside counsel or accounting firm to address specific circumstances. This document cannot be reproduced or redistributed outside of your institution without the written consent of PCBB.