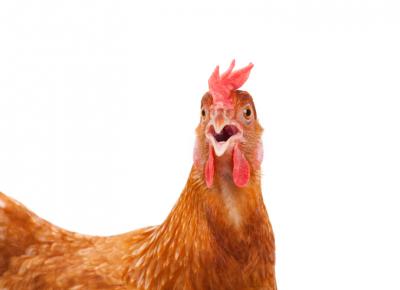 Up With The Chickens

Riding on the coattails of the puppy fashion industry, there's been an uptick in the number of chicken owners who are dressing their pet hens in knitted sweaters to provide an extra dose of warmth during the winter months.
Chicken sweaters are also used by many rescue organizations that take in retired hens to compensate for their lack of feathers caused by overcrowded, traumatic living conditions. Of course, not everybody believes in accessorizing chickens. Opponents claim that birds are warm-blooded and can regulate their own body temperatures, rendering sweaters unnecessary. Proponents disagree, saying sweaters are more than just a fashion statement and are necessary to keep the birds toasty and comfortable in the cold.
When it comes to innovation, community banks don't like counting our chickens before they are hatched, so bigger banks are often ahead in the pecking order. For instance, Citibank and Chase have recently been working on rollouts to allow customers to use ATMs without a card. Bank of America and Wells Fargo are also reportedly developing similar plans and BMO Harris Bank launched cardless ATMs for customers last year.
Apple Pay is another way some banks may be headed, but it's not the only mobile wallet solution and it's not a foregone conclusion that it will be the technology of choice for cashless ATM use. Many community bankers are watching and waiting to see the final verdict.
The idea of a cardless solution is intriguing. The goal is to make transactions safer since it would prevent credit card skimming--a growing and costly problem for banks. According to FICO, between Jan 1 and Apr 9, 2015, debit card data theft rose by 174% at bank-owned ATMs vs. the same period the year earlier. Collectively, banks are reportedly losing billions each year to skimming fraud.
As such, banks have been working to switch over ATMs to accept chip cards that make it more difficult for thieves to create counterfeits, but progress is slow. What's more, chip card transactions can take several minutes longer and banks are eager to avoid cranky consumers. If done right, cardless ATMs take away this pain point and it protects sensitive customer data as well. The cool factor of a cardless transaction is also a way to encourage younger customers to bank with you.
In yet another twist on security, more banks are beginning to offer a way for customers to easily shut off their debit cards in the event those cards are lost, misplaced or stolen. The service is known as a debit card lock and it's essentially an on/off switch that requires just a few taps or swipes on a mobile phone.
This technology has been on the market for a few years, but is gaining more interest among banks. Bank of America in fact, recently announced a new initiative using locking technology and Visa recently began marketing this service as well as other debit card protections to financial institutions.
Debit card locking technology is particularly useful when a customer's card is simply misplaced, but not stolen. Say a customer comes home from the grocery store, searches frantically through his wallet and can't find his debit card. He has the option to lock the card so no one can steal money from his bank account, and then do a more in-depth search for the lost card. If the card is found, the customer can simply unlock it, saving his bank the time and expense of reissuance.
Innovations such as cardless ATMs and debit locking technology are just a few ways banks can help solve security-related issues and keep customers from clucking. Given so many foxes lurking outside the hen house, the most forward-thinking banks are taking action to continually test, learn and adapt.
Subscribe to the BID Daily Newsletter to have it delivered by email daily.

The release of better-than-expected US economic data boosted yields 5bp.

1) Sandhills State Bank ($165mm, NE) will acquire Bank of Keystone ($68mm, NE) for an undisclosed sum. 2) North American Savings Bank, F.S.B. ($1.6B, MO) will acquire B&L Bank ($119mm, MO) for about $15.8mm in cash. 3) Midland States Bank ($2.9B, IL) will acquire $400mm in wealth management assets from Sterling National Bank ($11.9B, NY) for an undisclosed sum. 4) Kopernik Bank ($69mm, MD) and Liberty Bank of Maryland ($38mm, MD) will merge together for no monetary exchange, as they combine their mutual thrifts to form a larger entity. 5) BB&T ($209.9B, NC) will acquire commercial insurance brokerage firm Swett & Crawford (GA) for about $500mm in cash. Swett works as an intermediary between independent insurance agents and the nation's top insurance carriers and has 850 brokers, underwriters and support professionals.

In an interesting juxtaposition, on the same day Citigroup analysts said the risk of the world falling into a recession was rising (due to poor fundamentals), St. Louis Fed President Bullard said he's not very concerned about it and indicated, "I don't think the probabilities are particularly high right now."

Card Hub research finds the 5 US cities that reported the lowest average credit card debt in 2015 were: Clarkston, GA ($2,705); Camden, NJ ($2,850); Coachella, CA ($2,965); San Luis, AZ ($3,028); and Hamtramck, MI ($3,148).
Copyright 2018 PCBB. Information contained herein is based on sources we believe to be reliable, but its accuracy is not guaranteed. Customers should rely on their own outside counsel or accounting firm to address specific circumstances. This document cannot be reproduced or redistributed outside of your institution without the written consent of PCBB.