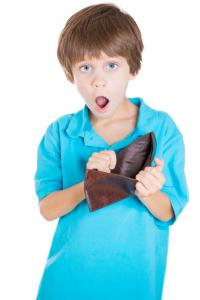 In the iconic 1950s television sitcom Leave It To Beaver, Theodore "Beaver" Cleaver constantly found himself in jams that he would inevitably try getting out of without his parents finding out or having to help. Take, for instance, the time a very young Beaver went several days without eating lunch at school because he had lost his lunch money and didn't want to tell his parents. After his parents learn about the skipped meals, Beaver must admit that he has repeatedly lost his lunch money. Frustrated by Beaver's carelessness, his father lectures him about responsibility. When Beaver insists he has learned his lesson, his father decides to test him by giving Beaver cash for a haircut and sending him off to the barber on his own. As can be expected, by the time Beaver makes it to the barber he discovers he has once again lost the money he was given and is instructed by the barber to return after getting more money from his parents. Afraid to admit that he has lost more money, Beaver instead gets his brother Wally to cut his hair--a decision that results in half of Beaver's head looking like it has been scalped.
For as long as hot lunches have been sold at schools, there has been drama surrounding lunch money--from bullies shaking down their peers, to children like Beaver simply losing the money they are given. Though the world has changed dramatically since the days of black and white television, most children still purchase lunches at their schools, even if the way they purchase it is changing.
These days, many schools have begun providing students with individual accounts to which they can charge everything from school lunches, to the cost of sports uniforms, field trips and any other school-related fees. Though mobile payment services have quickly gained traction and would seem a logical replacement for cash, especially since teenagers are among the biggest consumers of mobile phone services, most grade schools and even many high schools discourage or outright prohibit the use of mobile phones among students during the school day.
That means that a more likely option for replacing hard currency in schools would be payment cards that can be easily loaded with cash online by parents, or that could be directly linked to parents' credit cards. If such cards could be issued by banks on behalf of area schools, it would provide yet another unique marketing opportunity for community banks.
Given the changing nature of school payment methods, community banks would be well-served by contacting local schools to find out what payment options they currently offer students and what systems they already have in place. After all, the tighter you can get with the parents the more likely you are to acquire their kids as customers and keep them longer term.
Not surprisingly, there are a host of school-specific payment plans that have already popped up, from sites such as EZSchoolPay.com, MyPaymentsPlus.com, MyLunchMoney.com and many others. But given that electronic payments are still a relatively new idea for schools, it is quite likely that partnership opportunities still exist for banks. Consider the potential value of creating student-specific credit cards that would not only allow students to provide payments to their schools, but could also be used within the community at area stores.
Unlike online payment services handled entirely by parents, physical payment cards would give children the appearance that they have a bit more autonomy and would be a way of encouraging responsibility for keeping track of cards--something that remains as important to parents today as it was to Beaver's generation roughly 60Ys ago.
Partnering with schools for student payment services could provide invaluable marketing because it is also a way to familiarize students with your bank's brand and to establish relationships with them before they head off to college and eventually head out into the workforce.
At the same time, such relationships could be a good way of not only reminding parents of a local bank's presence, but of informing parents and students alike about other services offered. We can only imagine that if Beaver's father were still alive today he would jump at the opportunity to remove cash from the equation and to provide his son a more secure form of payment.
Subscribe to the BID Daily Newsletter to have it delivered by email daily.

Yields fell 3bp as investors sought refuge in haven assets amid a slide in oil and US equities.

The latest FDIC data shows the number of problem institutions declined to only 183 nationwide as of the end of 2015. This is down 79% from the peak of 2010 and now represents about 3% of total institutions (vs. 12% at the peak).

HSBC Bank becomes the latest large bank to offer fingerprint and voice recognition to replace passwords for its 50mm retail banking customers.
Copyright 2018 PCBB. Information contained herein is based on sources we believe to be reliable, but its accuracy is not guaranteed. Customers should rely on their own outside counsel or accounting firm to address specific circumstances. This document cannot be reproduced or redistributed outside of your institution without the written consent of PCBB.