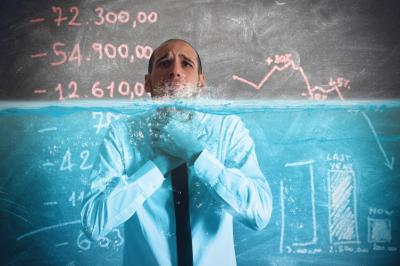 Bankers know there is all sorts of debt swirling around out there. You can put a clock on it, compare it to equity or income, collect it, eliminate it, consolidate it, take it long term or short term, be out of it, and you can even drown in it. Our country is great at this, racking up over $19,000,000,000,000 of the stuff. It used to be about 20% of GDP and has been as high as 120%. As a group, Americans love our debt which is why the Fed indicates household housing debt is about $8.8T and non-housing debt is about $3.3T. Of the non-housing portion, student loans are $1.2T, auto loans are $1.0T, credit cards are $0.7T and other is $0.4T. Before we drown in this commentary though, let's see how things look from a variety of perspectives.
Most Americans owe somebody something. According to a recent Pew Charitable Trust report, 80% of households are in debt. People are paying on credit cards, car loans, student loans, mortgages and other things.
It takes time to pay down debt. A Creditcards.com survey among Americans in debt shows that 21% believe they will never completely retire their debts and they expect to die while still owing money. In 2013, only 9% of people surveyed thought they would be buried along with their debts.
The 2008 recession forced people to tighten their belts. People have generally been careful as they spend less and some can now say that they have no debt at all. This group was 14% strong two years ago and 2015 ended with 22% in this camp.
Meanwhile, other households during this time have gotten into more trouble. The Creditcards.com survey indicates that the average age that Americans expect to be debt free is at least 54 now and 50% of those think they will remain in debt until 61.
Irresponsible spending is not always to blame. In fact, very slow income growth has been outpaced by a higher cost of living.
Some families are heavily in debt. The Pew Charitable Trust report shows an average debt load of $67,900, due to mortgage and unpaid credit card balances. There are also student loans, as 25% of Gen X respondents have median loan debts of $20,000.
For its part, Wells Fargo provides strategies on its website for customers to help them reduce debt faster. These include: creating a budget; organizing the debt to determine what is making the biggest impact on the budget; writing down the creditor, amount owed, monthly payment and interest rate for all accounts; pay the minimum on all debts each month and the most you can afford on the debt with the highest rate; look closely at the budget and cut back so you can pay more down on the debt; and consolidate multiple debts into a single loan. You might be able to help existing customers manage their debt even better over time, and as you help them you in turn help yourself (as they become better money managers and more able to repay what they may already owe you).
Talk to your clients because data from CardHub.com from Q3 2015 reinforces some of the issues people have when it comes to debt that can hurt banks. It found "evidence is mounting to support the notion that credit card users are reverting to pre-downturn bad habits"; that "the average indebted household's balance is above $8,000"; that this "is the highest amount since the Great Recession"; and that households are only "$400 below the tipping point CardHub identified as being unsustainable." Keep working with your clients to keep them from drowning in debt as you reinforce good habits and teach them all how to better manage their budgets.
Subscribe to the BID Daily Newsletter to have it delivered by email daily.

JPMorgan points out low interest rates are hindering the economy at this point in the cycle, as they undermine psychology and are weighing heavily on bank income.

Speaking at a conference, the CEO of BB&T said he sees no basis for all the "gloom and doom" and that while soft energy prices are a problem, nothing has really changed much in the past few months. He called his loan pipeline "good," said lending market price competition is "more reasonable," and indicated he does not see any "big change in the credit cycle is about to happen." Meanwhile, the CFO at Wells Fargo said at the same conference that they are not seeing any change in loan demand despite market turmoil and that the loan pipeline is "not much different from where it was back in Jan."

The CEO of BB&T said the bank may abstain from doing bank acquisitions, citing depressed stock prices in the industry as one key factor. Specifically, he stated that he doesn't "particularly like using our currency at these low prices" and that "the industry has been overly beaten down" so they may buy back more of their own stock for now.

Bankers should note Fed Chair Yellen's cautious tone from her Congressional testimony that indicated financial conditions have recently become less supportive of growth, equity prices have declined and strength in the dollar could weigh on the outlook for economic activity if they persist. Basically, unless these things work themselves out of the system in coming months, expect to see weaker economic activity and potentially higher loan losses as a result.

Research by the National Association of Corporate Directors finds directors at public companies spend an average of 248 hours per year doing board work vs. 191 hours 10Ys earlier.
Copyright 2018 PCBB. Information contained herein is based on sources we believe to be reliable, but its accuracy is not guaranteed. Customers should rely on their own outside counsel or accounting firm to address specific circumstances. This document cannot be reproduced or redistributed outside of your institution without the written consent of PCBB.