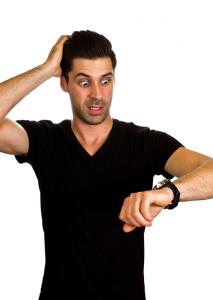 Taking 3 Minutes To Talk About Overdrafts

You may not realize it but research by UC Irvine finds the average amount of time people spend on any single task is 3 minutes before they are interrupted or switch to something else. We tell you this so you can set your watch and read on as we regale you with some interesting data this morning around consumer overdrafts and consumer behavior. Ready, set, go.
Research by Novantas looked at the impact of regulations on overdrafts and consumers. It found some interesting things, but perhaps at the top of the list, it uncovered that since new regulations kicked in during 2010, overdraft fees on consumer checking accounts have declined by up to 45% in the US banking industry. That is a huge decline in just a short period of time.
The next thing that jumped out of the research was that most of the current overdraft usage is a direct result of consumers making informed choices to do just that. In fact, Novantas found that based on its own research and published regulatory statistics that 83% of overdraft volume is associated with consumers who make monthly use of online tools to monitor checking account balances. That means these consumers are informed and on top of things it would appear.
Delving deeper, the research finds that when they asked consumers about their most recent overdraft, 66% said they knew they had a low balance in their account and chose to make the payment anyway. Of those, about 55% knew they were running low on funds, but said they used overdraft to make sure the payment went through. The other 45% said they knew they were low on funds but hoped their deposit would make it to their account before the purchase went through. These are both interesting to us as the first seems to show the customer is thinking before they act and in the second are gambling on the timing of things.
In yet another area that can be controlled by the customer, 26% said they overdrew the account because they did not know they were running low or their spouse made a withdrawal or did not make a deposit. This is interesting in that it shows people likely need more help with managing their money, creating a budget or other financial skills to avoid such issues. Nonetheless, here too the action was controllable and avoidable.
Next, the research found that consumers who are regular overdraft users have access to online banking (84%), mobile banking (68%), alerts (36%) and text or SMS banking (35%). This seems to indicate many may have instantaneous information on account balances before making the choice to overdraft.
Also of note, the research looked at the percentage of people who said they opted in for debit overdraft coverage. Here, a whopping 86% said they took the coverage. Of this group, most said they wanted a safety net in case they need to make an important purchase (69%); others said they had no intention of using it but took it because it was free (16%) and still others said they intended to regularly use it as a source for short-term credit (15%). The data is interesting as it seems to show people are thinking about what they are doing and making decisions to act a certain way to benefit themselves--what you would probably expect in fact.
Finally, the study looked at the alternatives overdraft users listed as options they will use to meet short-term funding needs. These included: using an overdraft service (44%); borrowing from friends and family (36%); balance transfer (32%); deposit advance (32%); credit card (29%); installment loan (24%); payday lending (15%); and lending circles (13%).
No matter where you come down on all of this and whether or not you think more regulation is warranted or less, the data is certainly interesting. It seems to show that people generally make informed decisions and take action they believe suits them. More to think about here, but we found it interesting so are sharing it with you this morning. Now, time is up so on to your next task.
Subscribe to the BID Daily Newsletter to have it delivered by email daily.

Yields rose 1bp as the FOMC reiterated interest rate hikes would be gradual and data dependent.

1) Pioneer State Bank ($69mm, IL) will acquire Farmers State Bank of Sublette ($39mm, IL) for an undisclosed sum. 2) The Old Fort Banking Co. ($471mm, OH) has sold 45% of itself to its employees through an ESOP. The acquisition takes the ESOP from 0% ownership to 45% and was established by The Old Fort Banking Company with a total value of about $15mm. The structure allowed Old Fort to buy a substantial portion of stock from a majority shareholder without having to change control or sell the bank.

JPMorgan announced it plans to roll out new ATM machines that will allow customers to withdraw cash using just their cell phone and will not require a card. It also plans to upgrade machines to allow customers to withdraw larger amounts of money (up to $3,000) and in different denominations. Meanwhile, Bank of America announced it is working on ATMs that will do the same, plus accept payments from credit card customers and cash checks.

Northwest Bank ($9.0B, PA) said it will consolidate 24 offices into nearby locations and convert 2 full services offices into drive up only facilities this year as it works to trim costs and consolidate its physical network.

An ICBA survey of community bankers finds: 64% have a platform that allows customers to conduct financial transactions, including deposits, through a mobile device. Additionally, 17% expect to add mobile banking this year, 14% are considering doing so in the next 1Y to 3Ys and 5% said they are unlikely to add mobile banking to their services.

Italy has reached an agreement with the EU that will allow Italian banks to offload bad assets into a so-called "bad bank" as a separately managed entity. Italy would then guarantee bad loan securitization senior debt tranches.
Copyright 2018 PCBB. Information contained herein is based on sources we believe to be reliable, but its accuracy is not guaranteed. Customers should rely on their own outside counsel or accounting firm to address specific circumstances. This document cannot be reproduced or redistributed outside of your institution without the written consent of PCBB.