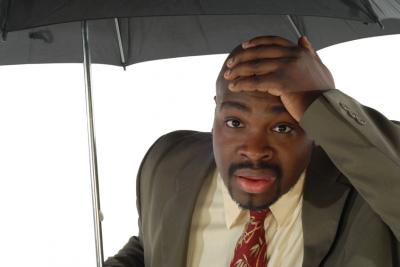 Today Is The Day But Bring Your Umbrella Too

We are finally here--the day the FOMC raises interest rates by 25bps for the first time since June 29, 2006. That means the last time your bank dealt with rising rates ended some 3,823 days ago or about 10.5Ys. That final rate increase ended a string that began in 2004 and saw an increase in rates of 425bps. A lot has changed since then.
At this point the markets are pretty volatile, so it is anyone's guess whether or not the Fed actually hikes rates, but we think they will. After all, nearly every single FOMC speaker has hit the road calling for rate increases and leaving bread crumbs all over the place over the past few weeks. If they don't, they risk losing credibility, so our money is on a 25bps rate hike.
If they raise the Federal funds (FF) rate 25bps, it would push the corridor to 0.25% to 0.50%, while the rate on Excess Balance Accounts (EBA) will likely be held at 0.25%. The rate increase is expected to be effective tomorrow.
As for the future path and speed of rates, we would expect the Fed to say they see balanced risks, plan to move slowly and that future moves remain data dependent.
As for the so-called "dot chart" that tracks Fed member expectations for the FF rate, we would expect it to be mostly the same to slightly softer at this point. The last report released in September shows the median for 2016 at about 1.25%, while 2017 looks like about 2.50% and 2018 comes in at about 3.50%. Again, given market volatility as of late and the fact the Fed does not want to be overly disruptive, look for lots of discussion around data dependency when they release an updated version of the dot chart following today's meeting.
There are also many counterpoints to a higher rate move at this time. These include reduced market liquidity following the crisis, weirdness in the jobs data, an election year, low inflation, an increase in expected losses in oil-related industries due to low prices and a not-so-robust business climate. Who knows if these or other shocks will surface or pick up steam, but that is certainly the risk so the Fed is also preparing to cut rates if needed down the road to support economic growth.
We would also be remiss if we at least didn't give a nod to history. Here, we note that the current recovery is running at about 78 months. That makes it longer than 29 of the past 33 expansions our country has seen since 1854. That makes it long in the tooth, so investors and bankers alike are worried any rate increase could lead to rate cuts down the road as well.
Economists also point to factors that include an aging population and slowing worker productivity growth as some of the key reasons why interest rates may not get pushed as high as they might have gone in past rate hike cycles. Unemployment is low, inflation is low and things seem pretty stable on those fronts now so perhaps the economists are right this time.
As for the latest expert predictions from the group of major economists surveyed by the Wall Street Journal, they predict an average FF rate as follows: by Dec 2015 (0.375%); 2016 (1.14%) and 2017 (2.20%). Interestingly, this same group predicts a low and high range of 0.13% to 0.50% (2015); 0.375% to 1.875% (2016) and 0.00% to 3.625% (2017). As can be seen from this data, estimates are all over the place, so we will have to wait and see how it all plays out.
No matter what you think right now, the Fed will dictate and that will drive behavioral changes in your customers, so you will have to be prepared. One more data point you might find interesting--research finds even the best Wall Street economists have track records worse than weather forecasters, so be sure to bring your umbrella as you closely monitor this Fed meeting and the potential for future rate movement.
Subscribe to the BID Daily Newsletter to have it delivered by email daily.

CNBC reports 42 major market participants who responded to its survey project the Fed will raise the Federal funds rate this month and as many as 3 more times next year.

Walmart has launched its own mobile payments technology (Walmart Pay) and is adding a feature to its existing mobile app that will allow consumers to pay at the register with payment information stored in their Walmart account.

The Society of Human Resources Management reports costs for employee turnover range from 33% to 150% of base salary. Meanwhile, research by the Center for American Progress finds the cost to replace an executive can be above 200% of salary.

A CNBC survey of CFOs at major companies finds cybersecurity actions they have taken compared to Feb 2015 include: audited or tested existing infrastructure (92%); replaced or upgraded existing hardware or software (85%); initiated new IT protocols (81%); increased size of IT staff (73%); developed or amended corporate response plans (46%); and purchased cyber insurance coverage (42%).

A study by The Wharton School finds reducing customer attrition by 5% to 10% can boost annual profits by up to 75%. Meanwhile, research by Bain & Company finds it costs 6 to 7 times more to acquire a new customer than to retain an existing one.

Washington Federal Bank ($14.6B, WA) now offers its small business customers a digital application process that allows them to submit all required documents to open an account.
Copyright 2018 PCBB. Information contained herein is based on sources we believe to be reliable, but its accuracy is not guaranteed. Customers should rely on their own outside counsel or accounting firm to address specific circumstances. This document cannot be reproduced or redistributed outside of your institution without the written consent of PCBB.