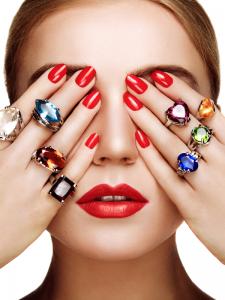 The US was first introduced to the idea of computers in 1946 when news broke about the Army's creation of ENIAC, an acronym which stood for Electronic Numerical Integrator and Computer. Designed for the Army's ballistic research lab to calculate artillery firing tables, ENIAC was essentially the first electronic programmable computer. Among its initial tasks were determining the feasibility of the hydrogen bomb. ENIAC weighed roughly 27 tons and contained 17,468 vacuum tubes, 70,000 resistors, 7,200 crystal diodes, 10,000 capacitors, 1,500 relays and roughly 5mm joints that were soldered by hand.
To say that computers have shrunk since then would be an ENIAC-sized understatement. Following the recent success of its Apple Watch, Apple has applied for a patent for devices and methods for creation of a rechargeable ring-mounted touch screen that would contain a computer processor, a wireless transceiver, a microphone, a camera and even motion sensors. This ring-sized computer (most likely the future iRing) would enable wearers to communicate commands to an external device, such as a cell phone, simply by making certain gestures with their fingers.
The massive decrease in the size of computers that has taken place over the past 69Ys is something ENIAC's creators likely never envisioned. As you might expect, it made us think about the banking industry--more specifically, the shrinking number of new banks that have been launched in recent years.
As we have noted before, the issuance of new bank charters has dropped off significantly in recent years, to a point of almost zero. Between 1990 and 2008 more than 2,000 new banks were launched, averaging more than 100 each year. But between 2009 and 2013, a mere 7 new banks were launched, averaging less than 2 per year.
Speculation for this spectacular decline has been far reaching and includes heavy regulation (like Dodd-Frank), a strong desire by the FDIC not to allow such activity and even a complete conspiracy by the regulatory agencies to reduce the number of banks so the industry can be better regulated in times of crisis. We will likely never totally know, but perhaps the real driver behind the dwindling number of new bank charters may have actually been the credit crisis itself.
Consider the findings of a recently released paper entitled "Where Are All The New Banks? The Role of Regulatory Burden in New Charter Creation," by the Fed. It finds that even if no new regulations had been introduced, the poor economy, coupled with the lingering low interest rate environment would have still led to between 75% and 80% of the current decline of new bank charters we have seen during this period.
Faced with the biggest global financial crisis since the Great Depression, the decision to significantly reduce both short-term and long-term interest rates was made in an effort to help shore up the economy. What the Fed may not have envisioned in taking such action was the fact that it would directly impact banks. This is because community banks in particular have had a drastically reduced ability to earn spread. Added to that was the fact that the weak economy decreased loan demand, resulting in even more depressed earnings.
According to the paper's findings, all of the above have played into the disappearance of new bank charters, as well as one other major factor--new banks have a harder time earning money than well-established peers when you are coming out of a recession and the FDIC rules have changed to a 7Y return timeline.
New banks typically tend to be small, both in terms of their assets and deposits; they tend to open in less rural locations than banks in previous eras; they earn much smaller margins on both their non-interest and interest operations and they must hold higher liquidity.
Given all of these realities, the authors found that it is not surprising that new banks were less than eager to launch into an already struggling economy. What remains to be seen is whether new bank activity will pick back up as the economy improves. We will keep watching the trends to see if things change and know Apple's followers will be watching for the introduction of an iRing.
Subscribe to the BID Daily Newsletter to have it delivered by email daily.

The RMA reports its survey of community bank members finds respondents ranked the following risks in order of importance: IT (51%), regulatory compliance (51%), interest rate (48%), credit (40%), operational (36%) and capital (35%).
Copyright 2018 PCBB. Information contained herein is based on sources we believe to be reliable, but its accuracy is not guaranteed. Customers should rely on their own outside counsel or accounting firm to address specific circumstances. This document cannot be reproduced or redistributed outside of your institution without the written consent of PCBB.