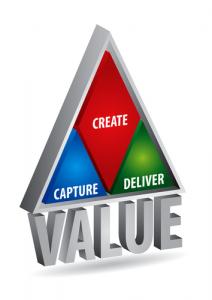 Creating Value When Everything Is Free

An artist rented 2 highway billboards in the Boston area and rather than put flashy advertisements imploring drivers to buy something in the space, he put photographs of nature - trees, plants and sky. At night, a high definition photo of the moon appears, and in the correct phase of the moon's cycle, with the Milky Way appearing when there is a new moon. The artist explained that the nature billboards were placed in the most heavily traveled, most intense traffic problem areas in order to give drivers a moment of curiosity and joy, to interrupt the normal stress of driving that would occur in these locations. In this era of targeted advertising, constant bombardment of our senses at all times, the idea of a nature billboard is so refreshing, but why does it seem so different? It is in the end just another targeted measure, just one meant to manipulate us in a different direction.
The prevalence of marketing messages has grown so much perhaps because in the world of internet communications, most content is free. Web companies have to make a living and the primary source of income is advertising. There are some exceptions though, as serious content providers seem to have overcome the pressure to offer their news reporting for free and in the end are thriving as high end providers.
We just saw the purchase by Nikkei of The Financial Times, the esteemed London investment newspaper which was purchased for 844mm GB Pounds. The sale of a large stake of The Economist is rumored as well and for top dollar, putting the value of the publication over 800mm pounds. Both of these publications have high priced subscriptions but have adapted the access to their news reporting to include the print version, internet only, or both. Their businesses have thrived in part because of their successful adaptation to modern access, but mostly because they still provide high quality, well researched information as an alternative to the opinionated sound bites that dominate other news resources.
The NY Times was the first publication to charge for internet access by limiting readers to a certain number of articles per month. There was resistance from both other news sources and from readers initially. After a period of adjustment though, other publications soon followed suit. The success of this transition has convinced investors to take another look at news providers, with Amazon founder Jeff Bezos buying the Washington Post 2Ys ago and investor Carlos Slim has increased his stake in the NY Times. One media executive explained that while there has been a lot of disruption in the industry, there has never been a lack of consumer demand for quality news content.
Banks are also struggling to create value and growth in a commoditized industry where it is difficult to differentiate products and services from a multitude of other offerings. The financial industry is still going through its disruption period, but we believe the quality providers will emerge in the end.
No one expects NBC or CNN to provide as in-depth reporting as The Economist or The Financial Times, and therefore people are willing to pay more than $150 a year for a subscription to The Economist. Banks need to differentiate themselves based on quality and value as well, rather than being the cheapest or the most sensational (We're Having a Rate Special!). Customers discern the difference in serious providers, especially when the message of quality is conveyed. Just like the highway billboards that seek to change the mood of stressed drivers with a different message, change the mood that surrounds the communications from your bank and its offerings to one of quality, consistency and serious content. Then there will be no question as to the value of the services your bank provides.
Subscribe to the BID Daily Newsletter to have it delivered by email daily.

Finally a rally in stock prices and Treasury yields that made it through the day. The Dow rose 619 points and yields rose 8 to 13bps.

Reports on Q2 GDP and home sales, although market attention will continue to focus overseas.

Target will reportedly pay $67mm to Visa to cover expenses banks incurred following the 2013 hacking that exposed consumer information on millions of customers.

Citigroup has agreed to refund $4.5mm to 15,000 investment customers charged excessive fees under an agreement with the NY Attorney General.

Citigroup has agreed to pay $15mm to resolve SEC claims that it failed to enforce policies and did not review thousands of trades executed by its trading desks over a 10Y period.

Banks should note a scam known as "card cracking" is targeting college students. Under the scam, students are contacted through social media promising $1,000 to $3,000 for a small amount of work. The students are then asked to provide bank account details or to open a new account (where details are captured). They are then instructed to deposit checks they receive into the accounts and later make large withdrawals online before their bank opens.

The FDIC has sued Citibank, US Bank and Bank of New York Mellon related to residential MBS purchased by a failed bank in TX (Guaranty Bank).

The Census Bureau reports the growth rate of new businesses climbed 2% to 27.6mm between 2007 and 2012 (latest data available), however the number of firms with paid employees declined 5% to 5.4mm over the same period. By category, women owned firms jumped 27% over this period (to 36% of all firms), but had an average of 8.5 employees vs. 13.5 for male owned firms.

Research by the Council of Economic Advisers finds the top life goals millennials say are the most important to them are: children better off (about 90% vs. same for Gen X), time for recreation (79% vs. 70% for Gen X), contribution to society (68% vs. 60% for Gen X), finding new ways to experience things (67% vs. 60% of Gen X) and living close to friends and family (50% vs. 40% of Gen X).
Copyright 2018 PCBB. Information contained herein is based on sources we believe to be reliable, but its accuracy is not guaranteed. Customers should rely on their own outside counsel or accounting firm to address specific circumstances. This document cannot be reproduced or redistributed outside of your institution without the written consent of PCBB.