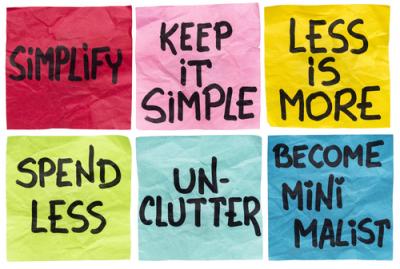 In the 1990's, a simplification task force was created to reinvent government. The idea was to make processes simpler, friendlier and less expensive. As a result, numerous small, common sense initiatives occurred. Office workers in KS at the Department of Veterans Affairs had their first floor office switched with the clinic on the floor above, a move that provided easier access for sick veterans. In the Pentagon, procurement processes were streamlined so that buyers for the military could use credit cards for purchases less than $2,500. The faster, more efficient procedures saved a lot of money.
Even the IRS changed its routine. Employees of the IRS believed that taxpayers needed tax forms in the mail as quickly as possible after the New Year, but they also found that taxpayers were happiest with as little contact as possible with the IRS. So the IRS only sent forms to Americans who prepared their own taxes. Taxpayers who used preparers didn't get forms at all. Taxpayers felt relieved and the IRS saved on stationery. In today's world, no one gets tax forms in the mail because everything is available online, but these kinds of improvements were significant in the pre-internet world.
Fast forward to current day banking where we also find great need for simplification. Streamlining call reports for community banks should be a priority and the subject has been receiving some press lately. The president of the Independent Community Bankers of America (ICBA) points out that he watched his bank's quarterly reports get fatter for years. In 1986, bankers just needed to produce 18 pages every quarter. Fifteen years later, their work load had grown to 29 pages and today the burden has almost tripled to 80 pages. During the same period, the instruction pages have ballooned to 700 pages. Now, Basel III Capital Reporting Requirements alone account for 60 new pages of instructions.
Community banks are adjusting to all of this but with some difficulty. According to the ICBA, 75% of banks spend $60K or more annually preparing their call reports. The number of employees involved in the preparation of call reports increased by a third and 60% of banks report that at least two of their employees are involved in the process.
The Comptroller of the Currency has heard these complaints and he agrees. He has acknowledged several times in public meetings that community banks don't have the same level of resources as the big banks and says layers upon layers of requirements can be onerous. His solution is to clean up and downsize. Regulators are considering deleting obsolete data items from the reports, because when all financial institutions report zero for a line item, it is an indication that there is no need for that item in the call reports. It's time to change to a better, shorter call report form.
For his part, Comptroller Curry would like to go even further and is asking Congress to modify the rules. He suggests that a greater number of healthy community banks should qualify for the 18 month examination cycle. By raising the asset threshold from $500mm to $750mm, more than 300 additional banks would qualify for the longer cycle.
Regulators are also in favor of exemptions from the Volcker Rule, the rule that bars banks from engaging in proprietary trading. Community banks who traditionally limit their business to a smaller footprint and are embedded in their communities, for the most part never even dabbled in this kind of business. Therefore, Mr. Curry recommends that banks with less than $10B in assets be exempt from the Volcker Rule.
There is still more work for the simplification task force ahead, but we like the idea. We commend these efforts as a good start, and look forward to further progress toward simplification.
Subscribe to the BID Daily Newsletter to have it delivered by email daily.

No major economic releases, so the market will look to international events.

Research by Accenture finds people said they would be interested in the following value added services if they were provided by their bank: discounts for purchases (54%); proactive bill-pay services (53%); product recommendations (52%); end-to-end assistance with car buying including help with negotiating a loan and providing vehicle recommendations (49%); and buying a home (46%).

A PwC survey of global business executives on risk finds the best of the bunch (risk leaders) have controls and practices in place to manage risks that include: identifying and forecasting emerging risks (96%); using risk ratings (96%); building organizational resilience to risk (88%); having horizontal scanning and early warning indicators (81%); and monitoring key risk indicators (80%).

Discover Financial said it will close its home loan business amid disappointing results and terminate 460 employees, as it focuses instead on direct banking accounts as an area for growth.

Meridian Compensation Partners research of executive compensation finds a 3Y performance period continues to be the most prevalent approach in long-term performance plans (70% of companies).
Copyright 2018 PCBB. Information contained herein is based on sources we believe to be reliable, but its accuracy is not guaranteed. Customers should rely on their own outside counsel or accounting firm to address specific circumstances. This document cannot be reproduced or redistributed outside of your institution without the written consent of PCBB.