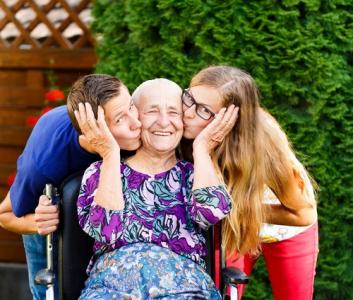 In The Pursuit Of Happiness

If you are old, female and religious, you have a higher chance of being happy than other demographic groups according to a recent Harris poll. Happiness statistics tell us that generally speaking, 34% of Americans say they feel very happy. However, once they become 50 and older, 36% are likely to say they are very happy, and beyond 65 years old, the percentage goes up to 42%. Among those under 50, just 30-32% are happy campers and women exceed men (36% vs. 33%). Then there is the religious factor as 38% of people who are somewhat religious declare themselves very happy vs. 29% of those not at all religious. It is much nicer to be around someone who is happy, so no matter what your age and stage, try to find a way to get there if you can.
Bankers will be pleased to hear that money matters too. Among those with an annual household income under $35K, the ranks of the very happy dwindle to 30-35%, but among those earning $100K or more, the very happy make up 38%. Add to wealth some optimism about the economy and all is well! Here, 40% of the very happy category are people who expect the economy to get better over the next year vs. only 33% of those who imagine that the economy will get worse.
Optimists will be glad to hear about the FDIC's last scorecard on the banking industry as its Q1 report on banks' health is quite encouraging. According to the FDIC, earnings in the industry rose 6.9% from a year ago to $39.8B. More happiness in the report was found around a large decline in the number of banks on the problem list. Only 253 banks made the list at the Q1 2015, while at the peak of the crisis in 2011, 888 banks were problematic.
FDIC Chair Gruenberg lauded community banks' performance, as once again they outpaced the industry as a whole. Community banks reported net income of $4.9B for the first quarter, 16% higher than a year ago. Community banks benefited from a strong loan growth with total loan balances growing by 9.1%. They also scored especially well in 3 departments: +7.4% in family residential mortgages, +9.5% in CRE and +10.0% in C&I. Expansion in C&I brought total assets in that sector to $190B, as manufacturers and retailers increased borrowing before expected increases in interest rates.
Another segment of the banking industry that benefited the biggest banks was trading. According to FDIC statistics, trading revenues grew 24% to $7.6B, but all but $21mm of the gains went to banks with more than $10B in assets.
Loans are the forte of community banks and earnings have benefitted from growth in longer term loans which tend to have higher yields. We know that regulators are keeping watch on the expansion of portfolio duration as a whole as it increases the interest rate risk on bank balance sheets. For now, the increase in longer term assets has helped community banks improve earnings and maintain better NIM than the big banks, but rate increases are right around the corner so caution is warranted. The industry at large posted NIM at 3.02%, while community bank NIM came in just below 3.5%.
The FDIC Chair applauded the industry performance, although he expressed concern over shrinking NIM and whether banks are being adequately compensated for risk in a highly competitive lending environment. There is a trade-off between NIM and duration, between current earnings and interest rate risk, and always there is concern about credit risk down the road for those banks with primarily floating rate assets.
The way we read the data, it appears FDIC Chair Gruenberg seems to have mostly found true happiness with community banks' performance. We can only hope continuing improvement in the economy and banking fundamentals will keep a smile on everyone's face now and in the future.
Subscribe to the BID Daily Newsletter to have it delivered by email daily.

All eyes will be on Europe and new proposals regarding Greece.

The Wall Street Journal reports bank regulators are issuing warnings about lending exposures to oil and gas producers. As part of the Shared National Credit review, regulators are reportedly telling banks a large number of loans issued to these companies are substandard.

Now that Greek citizens have voted no to ECB creditor demands, their banks risk failure within days and experts project a new drachma currency would likely be worth 20% of the euro.

The New York Times reports health insurance companies around the country are seeking rate increases of 20% to 40% or more, as new customers under Obamacare turn out to be sicker than projected. Look for companies to take action to further reduce health care offerings as they adjust to the surge in expenses.

The Wall Street Journal reports withdrawals from 401(k) retirement plans exceeded new contributions in 2013 (latest year available) for the first time ever, according to research by BrightScope, as investors pulled a net $11.4B from tax deferred savings plans.

These days, deposits typically support over 75% of a bank's assets.

A Bank Director survey on compensation finds the Top 5 things directors want the most or are the most highly valued are: levels of cash fees and/or retainers (91%); equity compensation (51%); paid expenses to attend board-related activities (28%); deferred compensation (21%); and insurance benefit (15%).
Copyright 2018 PCBB. Information contained herein is based on sources we believe to be reliable, but its accuracy is not guaranteed. Customers should rely on their own outside counsel or accounting firm to address specific circumstances. This document cannot be reproduced or redistributed outside of your institution without the written consent of PCBB.