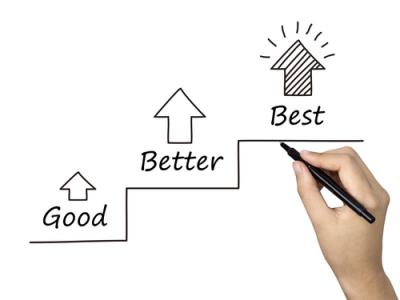 by Steve Brown
Share this Article:
Harvard Business Review ran an interesting article entitled, "Three Rules for Making a Company Truly Great." We've all seen books with similar titles and heard speakers on the circuit who espouse to know the "true" method for success. Truth is, if everyone could become truly great, then how do you determine who is better than whom? This is certainly not an argument for not trying harder or to only reach for average, but at some point after a period of appearing exceptional, almost every company reverts to the average mean of performance.
We don't have to tell bankers that because it has been such a tough period in the industry. Following the credit mess, bankers were crushed with regulation and now many are struggling to generate decent earnings in an interminable low interest rate environment. Is there something banks can do better?
The Harvard article reported on a statistical study that began with thousands of companies and then drilled down to a few hundred that have outperformed over a long enough period of time to qualify as truly exceptional. The startling outcome was that even though there were diverse decisions in all kinds of industries that each company made on a regular basis, they consistently practiced three seemingly elementary rules: 1) Better before cheaper - compete on differentiators rather than price; (2) Revenue before cost - prioritize increasing revenue over reducing costs and finally, (3) There is no #3 so change everything you need to in order to follow Rule #1 and #2.
These aren't even strategies, but are more fundamental concepts and a way of approaching every aspect of business. Clearly it is important for community banks to think in this way. The biggest banks almost always value cheaper over better and this explains a lot about their customer satisfaction levels. Managing costs for smaller banks is serious business though and especially when it's so hard to generate revenue. We looked at some cost analysis for a group of banks with assets ranging from $400mm to $3B, that have a commercial focus, an established branch footprint and an efficiency ratio of 55% to 70%. Does the community bank model with its inherent concentrations typically make a choice for better over cheaper?
On a fully-loaded basis, approximately 35% of the group's operating expenses were attributed to the lending side of business. A recurring theme in all the banks we studied was the 80%/20% rule - 80% of profits were derived from 20% of relationship officers. In almost every bank, a small group of officer portfolios comprised over 40% of the bank's loan portfolio, with individual officer portfolio sizes above $70mm. On the other extreme, we found a significant number of relationship officers with portfolios of less than $2mm. The difference could be attributed to loan types - a consumer lender will have a very different sized portfolio than a CRE lender, but the quantity of income generation attributed to just a few officers was striking. Is their contribution adequately acknowledged? How about the risk to the institution if they were to leave the bank?
Further, about 64% of the group's operating expenses were attributed to funding the bank. On a per account basis, the annual cost was about $265. While these costs are lower than a few years ago, this probably is one area with an opportunity for savings through greater use of technology, smaller branches and more efficient staffing.
Finally, about 25% of the study group's expenses went to HR, Accounting, Marketing, Audit and executives. IT functions accounted for another 10%.
On the expense side, most banks we know have worked hard already to cut excesses and it's difficult to find examples of those that have cost-cut their way to success. Success almost always requires making decisions in favor of quality, so as your bank goes forward, be certain to balance both sides of the discussion.
Subscribe to the BID Daily Newsletter to have it delivered by email daily.

Take Care Of Your Exporters And Importers