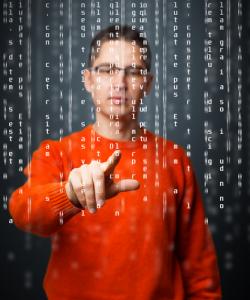 One of the great disputes of the Greek philosophers was whether visible light is a streaming set of particles or as Aristotle opined, light travels like a set of waves in a motion similar to those in the ocean. Some 20 centuries later, the discussion continues, albeit in a more digital framework.
In the fast-moving world of technological development, disturbing a still pond, or disruption, represents the highest praise for an idea. We have written in the past about Bitcoin, the virtual currency that executes funds transfers through a decentralized peer-to-peer digital system without the need for an intermediary. While Bitcoin is interesting and indeed is disruptive, its ability to fund retail transactions, its level of actual usefulness and therefore its adoption has not been broad. The decentralized nature of the Bitcoin also attracted money launderers of all stripes, drug traffickers and tax evaders. This aspect in turn has attracted the attention of financial regulators, law enforcement and the media. Bitcoin has pioneered something really interesting though and that is carrying out a virtual transaction without a currency exchange.
So what if a system could be developed to carry out secure, real-time transfers of funds in any currency without the necessity of either exchanging the currency or using intermediaries on either side of the transaction? Bitcoin demonstrated a solution to part of the puzzle, but what If a system could be created that did not involve creating a whole new currency? What if it used existing currencies and if governments could use it to verify that the process isn't a mechanism for criminals to move funds?
Solutions are being developed and some even envision an internet process that interconnects the world's disparate financial systems. A secure, real-time transfer of funds is really not possible today and the difficulty is that there are different standards and platforms for the transference of money, depending upon the country and the currency in question.
Work is being done on a number of fronts to make it possible to enable secure real-time domestic or international money transfers through existing products and networks. Consider a family from another country living and working in the US. They might be able to directly pay family utility bills without having a bank account in their home country or institutional payments flowing between banks with straight-through processing and end-to-end transaction traceability. Banks, money transmitters and clearing houses could use digital technology even without reserve requirements.
Players in the digital payments space are many and much of this world is still evolving. The good news is that as things stabilize, there should be opportunities for banks large and small.
For us, we will continue to watch this digital space for clues and monitor players to see how and when developments could impact community bankers. In the meantime, the current system for funds transfers works just fine, but is admittedly ripe for an update so we will see how that all evolves over time and who eventually comes to dominate this exciting space.
In the meantime, consider that as of the end of last year, about 15% of all purchases at Starbucks were made through its mobile app, in September Apple announced its new e-wallet Apple Pay and October of this year the EMV chip card officially rolls out in the US. Fun times for sure.
Subscribe to the BID Daily Newsletter to have it delivered by email daily.

Yields are currently down 2bps ahead of jobs data.

The head of the IMF, Christine Lagarde, warned that mediocre economic growth worldwide could become a new reality unless countries act to pursue structural reforms, infrastructure investment and trade reform.

Accenture finds 92% of millennial respondents to a survey say they were satisfied with the online banking experience at their primary bank, yet 20% said they still switched banks in the past year. Millennials said they want banks to provide an option to video chat with bank staff (50%) and provide a way for them to create and monitor their budget through an online platform (47%).

A Bank of America survey of small business owners finds respondents cite the following as the best way to drive repeat business: established relationships with customer base (57%); lowest prices (11%); prime location for repeat traffic (11%); loyalty programs (10%); and products or services not offered elsewhere (9%). Interestingly, by generational grouping 71% of Baby Boomers cited strong customer relationships as the best way vs. 53% of Gen X and 475 of Millennials.

The SEC has proposed rules that would require companies to disclose executive pay and performance information for itself and companies in a peer group in a table. Performance would be measured under the rule as total shareholder return and the total shareholder return of companies in a peer group. The change is part of a Dodd Frank effort to improve disclosures around executive compensation and financial performance.

The Fed has upgraded its phone system reportedly to have maximum flexibility when contacting the press for impromptu briefings when it begins to raise interest rates or other significant events occur.
Copyright 2018 PCBB. Information contained herein is based on sources we believe to be reliable, but its accuracy is not guaranteed. Customers should rely on their own outside counsel or accounting firm to address specific circumstances. This document cannot be reproduced or redistributed outside of your institution without the written consent of PCBB.