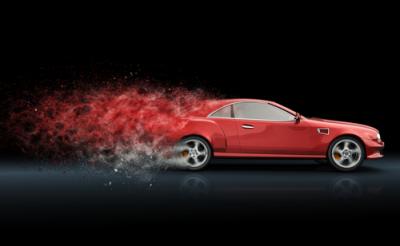 Speeding Ahead With Social Media

Popular Mechanics ran an article last year featuring the five worst states to be arrested for speeding. New Jersey was the ultimate worst state, thanks to a law on the books that allows the state to double fines for "racing" on public highways with a speed limit of 65 mph. Racing is defined as going 10 mph over the speed limit, a number that seems moderate enough that there would be a lot of drivers for highway patrol to target. Massachusetts was named the second worst state for its hefty fines and surcharges and for the sheer number of speed traps it has per mile. New York and Virginia also made the list, as did California, which came in fifth. Of note, once a ticket is issued in CA, the driver's insurance rates can rise up to 20x the cost of the actual fine. We can only imagine that radar detector sales are brisk in these states.
As banks speed around seeking new customers we note that social media today remains a mere blip on the radar screen for most banks. It's most definitely not a significant driver of new business, but that could change over time. Indeed, we're already seeing some shifts in industry thinking. Consider that social media wasn't identified at all in the 2013 CSI Banking Priorities Study, but in this year's study 3.2% of bank executives said they plan to use social media to attract new customers. Certainly, it's a small sliver of the industry, but it's a step in the right direction that about 20% of banks see social media as a strategic focus for 2015, according to the CSI 2015 Banking Priorities Study.
While most banks today have a presence on major networks like Facebook and Twitter, most also remain perplexed about how to use social media effectively to bring in new customers and new business from existing customers. Here are a few tips to rev your engines as you are working out a strategy for success.
Always use simple, concise language to get your message across. Be sure to avoid jargon and concepts that might confuse customers and prospects. When you post content, tailor it specifically to your audience. Customers won't tune in if they aren't interested in what you have to say. In other words, posting for the sake of posting won't win you new business.
Focus social media efforts on markets where your growth potential is the highest. This depends on your bank and area of the country, but here's an interesting nugget: 22% of respondents to KPMG's Community Banking Outlook survey named the underbanked as having the greatest growth opportunity, 19% said consumers nearing retirement and 16% cited the top 10% of income earners.
Next, always measure your social media success. Look at stats like the total number of users registered on your social platform, the number of total interactions, reach, impressions, brand sentiment, customer data, etc. Also be sure you have appropriate policies and controls in place to meet regulatory requirements and mitigate risk.
Finally, don't post the same type of content over and over again on multiple networks. This leaves customers no reason to follow you in more than one place. Don't use social media to launch price wars with competitors either because you'll only attract depositors who are rate sensitive and are flight risks. Above all, don't discount the value of social media just because you aren't seeing immediate results. Strategies depend on establishing an emotional bond with your audience, which develops over time.
Social media is probably years away from becoming a driving force for new business, but many banks are shifting into gear. Your bank can avoid future speed traps by racing to the front of the social media pack.
Subscribe to the BID Daily Newsletter to have it delivered by email daily.

As expected, it was a quiet day for the market as Treasury yields rose less than 1bp by the close.

Yields are currently down 1bp ahead of existing home sales.

Two Senators have proposed legislation that would raise the asset threshold from $500mm to $1B for healthy banks and allow those same banks < $1B to shift to an 18 month regulatory exam cycle.

A survey of CEOs by PwC finds 80% say mobile technologies for customer engagement are 'very' or 'somewhat' strategically important to their organization; 67% think there are more growth opportunities now than 3Ys ago; 54% plan on making an acquisition this year and 23% are considering exiting certain assets.

A survey by Harris finds 33% of households making $75k or more live paycheck to paycheck at least sometimes. Interestingly, 68% said that this was due to eating out too much.

The Labor Department reports that while unemployment is only 5.5% (the lowest level in 7Ys) overall, the rate for millennials is 9.1%.
Copyright 2018 PCBB. Information contained herein is based on sources we believe to be reliable, but its accuracy is not guaranteed. Customers should rely on their own outside counsel or accounting firm to address specific circumstances. This document cannot be reproduced or redistributed outside of your institution without the written consent of PCBB.