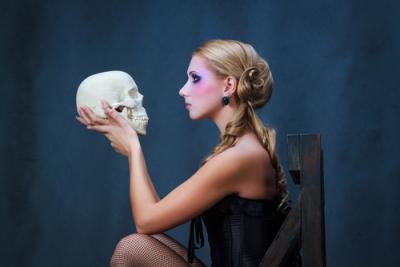 The Fed Prepares Us

We wait with bated breath. "Bated" is a word invented by Shakespeare, or at least he was the first to put it on paper (and the actual piece of paper survives to this day). Shakespeare used the word in his play The Merchant of Venice, and the scene occurs when the moneylender, Shylock, notes with irony that a merchant who previously had treated him rudely is coming back for a loan after all. Oh this is a story for bankers! As for the origins of "bated" - it's a truncation of "abate" which means diminished or reduced. So if we are waiting with bated breath for that loan customer, we really aren't breathing but are pretty much holding our breath, whether in anticipation or in irony.
Last week the financial markets were waiting with bated breath for the announcement after the meeting of the Fed. Everyone expected that "patient" would go out of the FOMC statement and indeed it did. But in the press conference following, Fed Chair Yellen pointedly noted that this didn't mean the Fed was getting impatient. In fact, there was a lot more dovish commentary, both at the press conference and in the FOMC statement than was expected. In the end, Fed rate expectations are more confused than ever.
Thinking back to the Fed under Ben Bernanke, there was a concerted effort toward more communication than had been the case in the awestruck days of Alan Greenspan. As Bernanke instituted various chapters of quantitative easing in efforts to stimulate the US economy, a set of economic targets was put in place, solidly in line with the Fed's dual mandate of maximum employment and maintaining price stability. We blew through the unemployment number some time ago, though many remain underemployed, either in part-time positions or at a reduced salary from prior to the financial crisis.
Price stability has been even more intriguing. The Fed set an upside trigger for inflation at 2.5%, but almost as an afterthought added a floor, or a target to encourage at least 2.0% inflation. The latter has been the sticky wicket. Inflation is running significantly below the 2% target and the Fed really wants this number higher. Deflation is a tricky economic condition to combat - people put off purchases since items will be cheaper tomorrow, and businesses do the same with investments. After the big drop in oil prices, CPI is projected at 0.30% for all of 2015. Even core inflation, which removes food and energy from the calculation, is running at 1.6% YOY and expected to be between 1.2% and 1.6% for 2015. This is giving the Fed some cause for concern, but also gives them room to wait before raising rates.
There were a couple of other important takeaways from last week's Fed meeting. There were downward revisions from December's meeting for almost every indicator in the Fed's Economic Projections release. That includes GDP, inflation, Fed Funds target rates and the Unemployment Rate. It's a little counter-intuitive that all the metrics of economic growth would be ramped lower, but that unemployment also is expected to continue to drop. This has been one of the quandaries of this economic recovery, that the unemployment rate seems a bit disconnected to other factors.
Previous Fed charts showed FOMC member expectations for year-end Fed Funds rates in 2015 and 2016 (the so called dot chart) to be significantly higher than the forward Treasury curve, but at this latest meeting the dots came into line with the forward curve. This development caused Treasury yields to drop about 12bps across the curve. Suffice it to say, the adventure continues and we will wait with bated breath for the next Fed release.
Subscribe to the BID Daily Newsletter to have it delivered by email daily.

Treasury yields fell 2bps as market speculation is that slowing inflation will push a rate hike out until at least the end of the year.

Yields are down less than 1bp ahead of durable goods.

A survey by Bank Director finds about 80% of respondents are worried about cyber security attacks vs. 51% who said so last year. Meanwhile, 94% said that they depend on outside vendors to manage their cyber security to either a heavy or moderate degree.

Royal Bank of Scotland said it plans to sell 115mm shares of Citizens Financial ($133B, RI) that it owns, as it seeks to reduce its ownership stake from about 70% to about 49% this year and entirely by the end of 2016. Royal took over Citizens during the credit crisis.

The Commerce Department reports sales of new homes jumped to a 7Y high in Feb despite harsh weather in certain parts of the country, pushing the inventory of homes that are available for sale down to a 4.7 month timeline to sell (vs. 5.1 month timeline in Jan).

Analysis by the Wall Street Journal finds banks have moved $300B from their AFS securities portfolio into HTM as of the end of 2014 (vs. 18 months prior). One key driver has been bank management teams worried that rising rates will lead to bigger mark to market losses on their fixed rate investment portfolio.

The British Banking Association is warning banks to take into account the impact of technology when trying to determine how fast customers may leave in the future. The group reminds banks that better technology has made it much faster and easier for customers to shift banks, making banks more susceptible to runs in difficult times.
Copyright 2018 PCBB. Information contained herein is based on sources we believe to be reliable, but its accuracy is not guaranteed. Customers should rely on their own outside counsel or accounting firm to address specific circumstances. This document cannot be reproduced or redistributed outside of your institution without the written consent of PCBB.