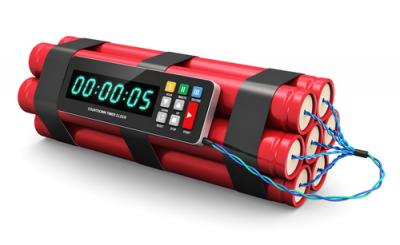 The Oatmeal is an internet site of whimsical, absurdist drawings by cartoonist Matthew Inman. He illustrates diverse subjects like pet ownership, technology use and there is even a series of hilariously illustrated grammar lessons. The Oatmeal's Facebook page has more than 3mm followers, so we guess it wasn't a surprise that when the artist announced a Kickstarter campaign to raise money for a new card game called Exploding Kittens, that the campaign raised more than 10x the original target amount in an hour's time. In fact, the card game is the most backed Kickstarter project ever. Do know that that there are no kittens harmed in the game. When a player draws an exploding kitten card from the deck, it results in immediate expulsion from the game unless the player has one of the "defuse cards" like a Catnip Sandwich or Laser Pointer to distract the kitten.
We wonder how these Kickstarter investors assessed the risk and reward potential of the card game project. Did they look at the historical success of card games in a modern internet-based world? Did they assess the likelihood of a positive return both initially and in the future considering a range of possible future economic scenarios? Were they just pulled in by the cute kitten drawings? We would suspect the latter was a strong influence. For their part, banks must take more care in underwriting and pricing loans than these investors. That is partly because the amounts involved are much larger, but also because regulators require that they do so. Pricing loans and understanding the overall value of customer relationships make up the secret sauce of banking, so measuring them intelligently is of paramount importance.
Bank regulators are currently focusing on the risk that models can bring because of their dependency on assumptions. They will therefore often ask banks to test a range of assumptions or scenarios. Given the measurement of profitability is always evolving, some of the same methodology is now being applied in profitability models to more accurately predict both risk and profitability going forward.
As if that weren't enough for bankers, FASB's current expected credit loss model (CECL) is also waiting in the wings. While the rules are not finished, CECL will require that banks consider credit risk and prepayments over the life of a loan in its ALLL calculations. As such, it only makes sense that the same approach should be taken in accurately assessing the risk and profitability of a loan or customer relationship in pricing and loan structure calculations.
As designed, earlier profitability models looked primarily at the past. More advanced models use not only the knowledge of the past, but also apply current and future economic forecasts to predict the value of a customer's future profitability.
These days, it isn't uncommon for a bank to incorporate current default risk and loss estimates into credit risk or allowances for loan loss reserve calculations, but what about incorporating that knowledge into estimating the duration of a loan? After all, the expected life of a loan is an integral part in measuring the profitability of a relationship. Further, a borrower's credit quality is going to largely determine their ability to prepay a loan and therefore this knowledge should be incorporated into the duration calculation. As a result, the more robust the analysis, the better idea a bank will have as to how loans will perform both now and in the future and ultimately how profitable the relationship will be.
In the kitten card game, players may draw the All-Seeing Goat Wizard card which allows one to see into the future. Until this option is available for your bank, measuring customer profitability should give a better idea of what the future holds. After all, you wouldn't want to leave your risk management up to the luck of the draw.
Subscribe to the BID Daily Newsletter to have it delivered by email daily.

Treasury yields sank 7bps as both PPI and housing data came in well below market expectations, reducing the likelihood that the Fed will consider a rate hike.

Yields are currently up 2bps this morning ahead of initial jobless claims.

Bankers talk a lot about the debt service coverage ratio when underwriting loans. This is a good cashflow calculation method, but stress testing EBITDA, revenues, lower margins, different rate scenarios and other factors are a great idea to be sure your deal remains within acceptable ranges. After all, historical performance is no indicator of future performance, the future is constantly evolving and there may be no valuable historical data point to measure things against.

The NFIB reports small business optimism fell to its lowest level in 3 months in Jan, as tax concerns increased for business owners.

JPMorgan projects that the Fed will increase interest rates in June, driven by a stronger jobs picture and better economic conditions.

A survey by Zogby Analytics of millennials finds 60% believe that by 2020 everything will be done on mobile devices, 54% would pay for goods and services using a mobile wallet and 54 would deposit checks by taking a picture using their smartphone.

Reuters reports the chief economist of the IMF says he thinks 2015 growth forecasts are too gloomy.

CoreLogic reports completed foreclosures in the US fell nearly 14% YOY in Dec 2014 and overall foreclosure inventory fell 34% during the same time to about 552,000 homes in some stage of foreclosure.

The Postal Service is seeking approval to raise some mail rates as it seeks to counter a $5.5B loss in 2014.
Copyright 2018 PCBB. Information contained herein is based on sources we believe to be reliable, but its accuracy is not guaranteed. Customers should rely on their own outside counsel or accounting firm to address specific circumstances. This document cannot be reproduced or redistributed outside of your institution without the written consent of PCBB.