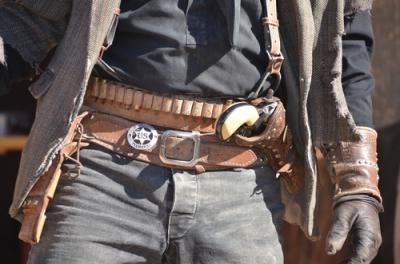 Apple Pay At The OK Corral

A few years back there was a public outcry over the idea of a posthumous pardon for the infamous outlaw Billy the Kid. It seems that before being shot to death by Sheriff Pat Garrett, The Kid may have been promised a pardon from New Mexico's territorial governor at the time. In more recent history, when the proposal to clear the outlaw's reputation became public, Garrett's relatives went berserk. The upshot is that Billy the Kid remains an outlaw, although there is still uncertainty about whether Garrett took down the right bandit. Some historians claim that the real Kid lived on incognito, dying of a heart attack at the ripe old age of 90, and that Garrett actually killed another man in the famed shootout and subsequently lied about it. No one knows for sure as no one who lived back then is still around, but it is fun to speculate for sure.
The banking industry too is gearing up for its own type of showdown between Apple Pay and CurrentC, the mobile app being developed by a retailer-owned mobile technology network called Merchant Customer Exchange. While community banks aren't really big players in the payments space, or not yet, there could be more at stake for them if Apple Pay or CurrentC really take off. If consumers and businesses grow more accustomed to the convenience of paying for goods and services via smartphone, community banks that don't have skin in the game run the risk of quickly losing market share.
The story is still unfolding and the next few months should be interesting. Hundreds of banks and retailers have signed on to use Apple Pay, which went live toward the end of last year. In like fashion, Google has had its own version of digital payment on Droid phones for some time. Digital payments are good for community banks in that there are still middle-men in the process so banks can retain a revenue stream. But, it's still largely anyone's guess how widely customers will adopt the new technology and whether it will prove as profitable as hoped.
Enter the rival CurrentC, which is meant to work on any smartphone by creating a QR code that can be scanned by existing checkout scanners. Currently in the pilot stage, CurrentC will offer customers multiple ways to pay merchants, including personal checking accounts, merchant gift cards and select merchant-branded credit and debit accounts. It doesn't seem as compelling for banks from a revenue perspective, but that doesn't mean the app won't ultimately be a force to be reckoned with in the payments space. CurrentC is expected to be rolled out sometime this year and already a few large merchants have signaled their intention to support CurrentC and rebuff Apple Pay.
Security is a top concern for would-be users, and while nothing is 100% secure, it would seem that Apple Pay is light years ahead of the magnetic strip and signature system currently used by credit cards in the US. That antiquated system is being phased out by EMV chip cards but it's unclear what effect this will have on broader mobile wallet adoption.
Meanwhile, CurrentC hasn't launched yet, so it's hard to say with certainty how secure it will be. Troubling, though, is an Oct incident where unauthorized third parties stole the email addresses of some CurrentC pilot program participants. They were reportedly dummy accounts used for testing purposes only, but the incident didn't do much to foster marketplace confidence.
Today, the payments space remains much like the Wild West, with many claims being made for previously unchartered territories. Suffice it to say, many guns have been cocked, many gunfighters roam the streets and law enforcement seems to be largely absent, so the battle is set to begin.
Subscribe to the BID Daily Newsletter to have it delivered by email daily.

Treasury yields rose 3bps by the close as strength in the equities helped to inject investors with a fresh dose of optimism.

Yields are currently unchanged this morning while the market waits for retail sales and jobs data releases.

The White House says the US government will launch a new agency responsible for monitoring and responding to cybersecurity threats, called the Cyber Threat Intelligence Integration Center (CTIIC).

The CA Department of Business Oversight has fined online loan servicer CashCall $1mm to settle allegations the company deceived consumers, exceeded interest rate caps for nonbank lenders and lied to regulators about how much they would charge for personal loans.

The SEC has proposed rules that would require companies to disclose if their officers or employees could hedge or otherwise offset decreases in the market value of stock received as compensation.

Reuters reports interviews with current and former Fed policymakers and staff points to a gradual tightening process as a likely scenario.

Fed SF President Williams said he thinks the US is close to full employment and that the time to start tightening is getting closer and closer.
Copyright 2018 PCBB. Information contained herein is based on sources we believe to be reliable, but its accuracy is not guaranteed. Customers should rely on their own outside counsel or accounting firm to address specific circumstances. This document cannot be reproduced or redistributed outside of your institution without the written consent of PCBB.