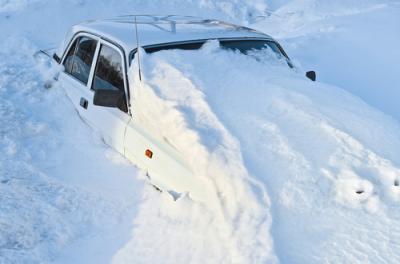 Last week, a winter storm took aim at the northeastern US. The Weather Channel blustered and the storm was labeled "historic" before it occurred. New York City and cities all up the coast were shut down in anticipation, school was cancelled, transit stopped, businesses shuttered and driving curfews were imposed. The NY subways were even stopped due to the predicted snow, a first in its 110Y history. In the end, the overnight amount of snow in Central Park was around 8 inches, a pretty normal Jan storm. There has been a lot of vitriol towards the weather predictors and we think that is ridiculous - no one can know in advance what is going to happen with the weather. We also think it's ridiculous to preemptively shut down NYC in anticipation of an event of unknown magnitude.
This situation did bring up some important aspects of disaster recovery and contingency planning for bankers though. PCBB has customers in the Eastern corridor that were in the path of the storm. We began to get calls the day prior as it became clear that regardless of the severity of the storm, getting to work was going to be impossible the next day. The business of the bank has to go on. There are cash transfers and outgoing wires, businesses have payrolls and other transactions of absolute importance. One customer realized that their correspondents were in the impacted region and therefore likely to have the same issue of employees unable to get to work. They didn't have a cash management account with us, but called in a panic to see if we could help.
We don't like to brag, but we would say there is a big difference in working with a customer-oriented team like PCBB and one of the behemoths. We emailed the bank our "Disaster Recovery Off-Line Wire Template" for the bank to put on letterhead outlining authority to perform transactions for the bank. With that we were ready to go. We didn't need 18 pages of notarized documents in our physical possession or a corporate resolution signed by all the board members before we could help them.
We have worked with community bankers in the past in dire situations, using wire instructions that were photographed and texted from a cell phone when a bank was without power, land lines or internet in a forest fire zone. We've also worked with improvised dual control in ice storms when a bank only had one remote laptop and no one could get to the bank. Any time there is a major weather event it is a reminder of what the development of contingency plans is all about - putting in place a plan of how your bank will operate if the normal infrastructure in your area isn't functioning. You also need to consider whether service providers will be able to function in the same circumstance.
Our suggestion is to take a few moments and review your bank's plan. If you don't have a cash management account with PCBB, consider setting one up. It's not only good for your contingency plan, but we offer fantastic service and, given our California location, can operate later in the day than most others.
It's easy to snicker in hindsight over the silliness of shutting down NYC, but in addition to the cost to business and productivity, there is the "Boy who Cried Wolf" aspect. It is easy to ignore advice when sensationalized reports of "the biggest storm ever" happen repeatedly. People who did not heed calls to get out of the way during Hurricane Sandy or Katrina in New Orleans suffered. Since we can't depend upon rationality from the media, at least spend some time with your bank's recovery plans and be sure they cover not only your bank and its employees, but also your providers so that you will be ready, should that big storm ever come to your neighborhood.
Subscribe to the BID Daily Newsletter to have it delivered by email daily.

Treasury yields jumped up 8bps by the close as the sharp increase in the price of oil gave the market a fresh dose of optimism.

Yields are currently unchanged as the day is slated to be a relatively calm one.

Community bankers should note it isn't your imagination that more customers are jumping into longer term fixed rate loans at cheap levels. One reason is that the commercial mortgage backed securities (CMBS) market has rebounded aggressively, with issuance jumping nearly 300% over the past 3Ys alone. In total, lenders originated $94B in CMBS loans in 2014, the highest issuance in 7Ys, according to Commercial Mortgage Alert. Experts project even higher origination this year into CMBS structures.

Tri Counties Bank ($2.8B, CA) said it has closed 8 branches related to its acquisition of North Valley Bancorp, as it seeks to streamline business operations.

Various news services report S&P has settled with the DOJ and will pay $1.5B to resolve litigation related to bonds it rated prior to the financial crisis. The DOJ alleged S&P knowingly misled investors when it assigned grades to mortgage bonds.

The OCC identifies the following list of risks facing community and midsize banks: 1) high strategic risk as banks adapt their business models to respond to sluggish economic growth, low interest rates, and intense competitive pressures; 2) properly planning for management succession and retention of key staff; 3) erosion of underwriting standards in various loan product; 4) expansion into loan products that require specialized risk management processes and skills, such as participations in syndicated leveraged loans; 5) increasing exposure to IRR at banks with concentrations in long-term assets (including mortgage-backed securities [MBS] and loans) and uncertainties about the behavior of NMDs once interest rates increase; 6) appropriate oversight of third parties that perform operational and business functions; 7) increasing volume and sophistication of cyber threats; 8) increasing BSA/AML risk because of higher-risk services and customer relationships and 9) ensuring effective compliance management systems and staffing.
Copyright 2018 PCBB. Information contained herein is based on sources we believe to be reliable, but its accuracy is not guaranteed. Customers should rely on their own outside counsel or accounting firm to address specific circumstances. This document cannot be reproduced or redistributed outside of your institution without the written consent of PCBB.