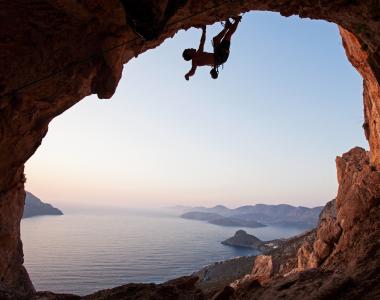 Being a banker may feel like a risk-obsessed profession, but in terms of physical safety, being a mild-mannered banker is off the bottom of the risky job list. Most of us face more danger driving to and from work than from the actual duties of our jobs. The most dangerous jobs in the US as measured by the number of fatalities predictably include police and firemen, but by far the most dangerous profession is being a fisherman (200 deaths per 100K). This compares with firemen at 4.4 deaths per 100K and police around 13. Other professions with more on-the-job fatalities than cops and firemen are airline pilots with 57 fatalities, loggers, roofers, sanitation workers and farmers.
Even if bankers aren't worried about perishing in the line of duty, their jobs are centered on managing risk. There are certainly risks banks won't go near, like the marijuana industry. Marijuana is now legal for recreational use in CO and WA and is available for medicinal use in 23 states. Yet, most marijuana growers can't get a banking relationship because regardless of what individual states vote to allow, taking part in commerce of a federally illegal substance is prohibited. This means customers of pot sellers can't use credit cards or checks to buy legal wares and as a result, there are large piles of cash lying around in the shops that sell it. This not only creates personal safety issues for business owners but it also interferes with states' ability to collect taxes in that record keeping is very difficult.
CO is working to come up with a solution, the most recent of which came from the Colorado Division of Financial Services. It issued an unconditional charter for a credit union to become the first financial institution designated to serve the cannabis industry. There are some hitches - the CU will have to clear federal regulatory hurdles including being approved for deposit insurance by the NCUA (a process which can take up to 2Ys). Meanwhile, CO law allows a CU to open its doors while an application for deposit insurance is pending, but what if the insurance isn't approved? Does the CU go out of business and if so, what happens to the depositors?
There is a tricky path ahead to be sure. In neighboring NM, some financial institutions have shut down cannabis-related accounts and state regulators are advising others to stay away. At a recent operations conference, there was concern that even a service provider to a financial institution which serves the marijuana industry could have liability exposure. Finally two other neighboring states, NE and OK are asking the US Supreme Court to declare the use of recreational marijuana in CO unconstitutional (violating the Constitution's supremacy clause which says federal law trumps state laws). If these claims are successful, what happens to a bank that serves the industry?
There is a lot at stake for CO with some $60mm in tax revenues coming into state coffers since last Jan. The last election also saw more states decriminalize its use, but the federal laws that govern financial institutions' ability to serve the industry have not changed. New laws are needed in order to protect the safety of people working in the legal pot industry and to protect the financial institutions that do business with them.
As for the most dangerous jobs, the average number of workplace fatalities for all professions in the US is 3.3 per 100K. Given the amount of cash floating around the pot industry, those workers may be rising on the list. For now at least, the risk seems too high for banks and avoidance of this industry will continue.
Subscribe to the BID Daily Newsletter to have it delivered by email daily.

Treasury yields plummeted 5bps as weak retail sales triggered talk that the Fed may not raise interest rates this year.

Yields are currently down 4bps as the Swiss National Bank's decision to end its minimum exchange rate took the market completely by surprise.

Citibank reports that in 2014 it cut back consumer banking services to all but the top 100 cities in the world where they felt they had the most scale and potential.

MetLife said it will sue regulators after it was labeled "systemically important" by the FSOC. The insurer says the designation will put them at a competitive disadvantage and increase insurance products to consumers.
Copyright 2018 PCBB. Information contained herein is based on sources we believe to be reliable, but its accuracy is not guaranteed. Customers should rely on their own outside counsel or accounting firm to address specific circumstances. This document cannot be reproduced or redistributed outside of your institution without the written consent of PCBB.